Government Deficit of -2.5% of GDP in the first nine months to September 2015 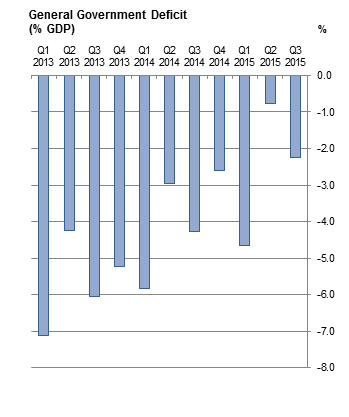 The results in this release are presented under ESA 2010 standards. See text box below and Background Notes for further information.

This detailed release along with the headline figures published on 19 January 2016 together comprise the official publication by CSO of quarterly Government Finance Statistics results for the period Q1 2011 to Q3 2015.

The data published in this series are consistent with the General Government Deficit and Debt levels reported to Eurostat at end-December 2015.   Consequently they may not always be fully aligned with the National Income and Expenditure and related publications such as the Institutional Sector Accounts.

No revisions have been made to previously published figures for the quarters up to Q4 2014 inclusive.

Minor revisions have been made to previously published debt figures for Q1 and Q2 2015.

The GDP figures used in the current publication are consistent with those published in the National Income and Expenditure 2014 and the latest Quarterly National Accounts publication (of 10 December 2015). These revisions have also resulted in updated debt and deficit ratios reported since the last release.

P.51g   Gross fixed capital formation - acquisitions, less disposals, of fixed assets during a given period plus certain additions to the value of non-produced assets realised by productive activity.Fixed assets are tangible or intangible assets produced as outputs from processes of production that are themselves used repeatedly, or continuously, in processes of production for more than one year.

D.1      Compensation of employees – the total remuneration of government employees.

D.5      Current taxes on income, wealth, etc, (payable) - all compulsory, unrequited payments, in cash or in kind, levied periodically by general government and by the rest of the world on the income and wealth of units in the economy, and some periodic taxes which are assessed neither on income nor wealth.

P.1       Total Output of government is equal to market output, own account capital formation, and non-market output (i.e. the sum of D.1+P.2+P51c). The market output referred to in this publication is the imputed market value of social housing rented dwellings. (See Table 3)

P.3        Final consumption expenditure of government is equal to the total of its output (P.1) plus the expenditure on products/services supplied to households via market producers minus the sales of goods and services (at both market and non-market prices). This is made up of individual non-market services plus collective non-market services (P.31 and P.32) (See Table 4).  This data series will be revised as part of the March 2016 EDP transmission.

Scan the QR code below to view this release online or go to
http://www.cso.ie/en/releasesandpublications/er/gfsq/governmentfinancestatisticsquarter32015/