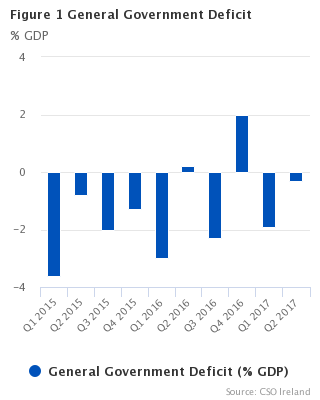 At the end of Q2 2017, general government net debt was €172.7 billion (60.8% of GDP).  This is a reduction on the net debt level of a year earlier which stood at €173.2 billion.  Although the level of gross debt increased over this period, the corresponding debt instrument assets increased to a greater extent resulting in a reduction in the level of net debt (Tables 2 and 7).

This release comprises the latest official publication by CSO of quarterly Government Finance Statistics (GFS) for the period Q1 2013 to Q2 2017.

The results for 2016 remain provisional estimates pending completion of the normal Excessive Deficit Procedure (EDP) verification process by Eurostat.  They replace the data published as part of the EDP notification on 24 April 2017. The data published in this series are fully consistent with the Quarterly National Accounts.

The full suite of GFS tables are also available on the CSO website by clicking here.

On 27 March 2017 Eurostat published a Guidance Note on the treatment of mobile phone licences, exploration rights and other licences on the recording of revenues arising from the sale of licences by government - click here.

This clarifies the rules for whether sales of licences by government for use of natural resources (e.g. use of the electromagnetic spectrum for mobile phone transmissions) should be treated as the direct sale of an asset, resulting in a once-off revenue or as the rent of an asset over a prolonged period resulting in a series of revenue over the period of the licence.

The changes in key revenue and expenditure aggregates following this revised treatment are as follows:

The general government debt (GG Debt) of Ireland includes borrowings from the European Financial Stability Facility (EFSF). The terms of the agreement establishing the EFSF were that it was a facility to make loans to euro area Member States and to finance such loans by issuing or entering into funding instruments backed by guarantees.  The financing was made available in the context of the financial crisis as a facility for Member States “in difficulties caused by exceptional circumstances beyond such Member States' control”.

The first of these loans to Ireland was drawn down in February 2011 and had an original maturity date of 18 July 2016.  In accordance with the arrangements for EFSF borrowing at that time, a pre-paid margin of €530 million was deducted from the loan amount on disbursement and held as a cash reserve, essentially as a form of security.

The total amount shown on the GG Debt for Ireland in relation to this loan was €4,194 million. This sum includes the full pre-paid margin of €530 million. There was also a counterbalancing asset in the amount of the margin shown in the accounts.

Following a decision of the relevant Heads of State and Government on 21 July 2011 the margin was no longer applicable to new loans, and the reimbursement of the prepaid margin plus interest earned over the period fell due to Ireland and the member state guarantors (€485 million and €45 million respectively) in proportion to the duration of the loan before and after 21 July 2011.  For Ireland, therefore, this reimbursement fell due on 18 July 2016*.  On this date a payment of €554.9 million was received. This payment comprises the portion of the pre-paid margin due to the Exchequer (covering the period from 21 July 2011 onwards) plus interest income.

Following clarification from Eurostat the original margin of €530 million has been recorded as interest expenditure over the period of the loan (2011-2016) and the rebate of €554.9 million has been treated as one-off capital transfer revenue in 2016.  This treatment is specific to this particular loan and applies to all Member States involved in this type of borrowing from the EFSF. It does not apply to other loans drawn down from the EFSF or other programme funding accessed by Ireland during the financial crisis.  This treatment was applied in the April version of these figures and is unchanged in the current release.

The Central Bank paid a dividend to the exchequer of €1.2 billion in Quarter 2 2016 and €0.9 billion in Quarter 2 2017 which are recorded as Investment income. Dividends paid to the State are subject to the "super-dividend test" which excludes holding gains from the profit on which dividends may be paid. Payments to Government in excess of the allowable profit are recorded as equity withdrawals and are not part of revenue. In both 2016 and 2017, the Central Bank surplus paid to the Exchequer were split into two parts - dividend and equity withdrawal as a result of the "super-dividend test".

The GDP figures used in the current publication are consistent with those published in the latest Quarterly National Accounts published on 15 September 2017.

Estimates of the general government deficit (GG deficit) for years 2002 to 2016 have been revised since April 2017. The changes reflect the changes due to the revised methodology following the updated Eurostat guidance on the sale of licences. Changes to recent years also reflect the availability of more up-to-date and detailed data sources.

Estimates of the general government debt (GG debt) for the quarters Q1 2013 to Q1 2017 have been revised since April 2017.  Changes are due to improved compilation processes and, in recent years, also reflect the availability of more up-to-date and detailed data sources.

This measure is by definition equal to both Total revenue (TR) less Total expenditure (TE), and Net acquisition of financial assets less Net incurrence of liabilities (Tables 1 and 5).  In order to respect this accounting identity, a technical adjustment is made to the level of transactions recorded in liability category F32 (long-term debt securities) to eliminate any statistical discrepancy between the two approaches to the calculation of GG deficit/surplus. This adjustment has no impact on Gross debt, Net debt or Net worth. For this Q2 2016 release, see note on revisions referred to earlier.

‘Nominal value’ is defined in the governing regulation as face value.  If debt is sold at a discount, it is the undiscounted value of the instrument, rather than the amount actually received, that is shown in the GG debt. In other statistical contexts, ‘nominal value’ means face value plus any interest accrued but not paid; however, such interest is excluded from GG Debt by definition.

Detailed codes and technical definitions can be seen in the ESA 2010 manual available at here.

P.51g   Gross fixed capital formation - acquisitions, less disposals, of fixed assets during a given period plus certain additions to the value of non-produced assets realised by productive activity. Fixed assets are tangible or intangible assets produced as outputs from processes of production that are themselves used repeatedly, or continuously, in processes of production for more than one year.

D.5      Current taxes on income, wealth, etc., (payable) - all compulsory, unrequited payments, in cash or in kind, levied periodically by general government and by the rest of the world on the income and wealth of units in the economy, and some periodic taxes which are assessed neither on income nor wealth.

P.1       Total output of government is equal to market output, own account capital formation, and non-market output (i.e. the sum of D.1+P.2+P51c). The market output referred to in this publication is the imputed market value of social housing rented dwellings. See Table 3.

Scan the QR code below to view this release online or go to
http://www.cso.ie/en/releasesandpublications/er/gfsq/governmentfinancestatisticsquarter22017/