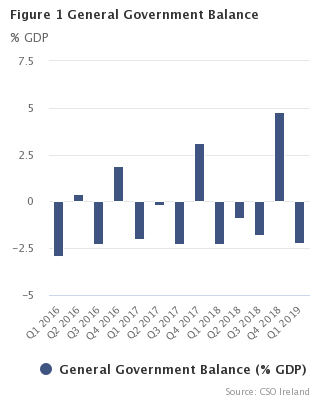 At the end of March 2019, General Government Net Debt was €179.1 billion (54.6% of GDP), an increase of €1.6 billion on the net debt level a year earlier. In the same period Maastricht debt rose by €5.2 billion due primarily to the issuance of long-term debt securities. This was largely offset by a €4.7 billion increase in Currency and deposit assets which are intended to cover remaining 2019 debt repayments. The market value of Equity and Investment Fund Shares fell by €3.4 billion over the year. This decrease in the value of the investment portfolio was caused mainly by stock market movements which impacted the State’s shares in Irish banks (Tables 2, 5 and 6).

This release comprises the latest official publication by CSO of quarterly Government Finance Statistics (GFS) for the period Q1 2016 to Q1 2019.

The data published in this series are consistent with with National Income and Expenditure. Government accounts are compiled in the EU according to the European System of National Accounts framework - ESA2010.

The calculation methods for quarterly GFS are similar to those used in deriving the annual GFS. As some of the available sources are of lesser reliability than those used for annual GFS, the quarterly estimates are subject to a greater margin of error than the annual figures.

As of March 2018, 14 Approved Housing Bodies (AHBs) have been reclassified to the local government sub-sector (S.1313) from the Non-Profit Institution Serving Households Sector (S.15). In addition the housing activities of another non-profit organisation have been re-routed to the local government sub-sector. Details on the reclassification can be found here .

In 2018 Q2 the exchequer received a super dividend of €1,426 million from the Central Bank of Ireland.

In 2013 the payment by the Exchequer of €1.1 billion to meet obligations to IBRC deposit holders under the guarantee schemes in operation was treated as the granting of a loan from the Exchequer to IBRC, on the understanding that the Exchequer would be treated as a creditor of IBRC in the liquidation process and that there was a reasonable expectation of repayment.  The 2018 re-payment of €340.7 million was made in 2018 Q4.

In June 2018 there was a settlement made following a court process with medical consultants in relation to pay arrears.  The backdated payments of €213 million were recorded as D.99 expenditure of central government in Q2 2018.

In quarter 1 of 2019 the market value of the State's Equity and Investment Fund Shares assets stood at €39.9 billion, up from €37.0 billion in quarter 4 of 2018 (Table 6). The increase in the value of the State’s equity holdings is explained mostly by stock market gains during the quarter relating to shares held in Irish banks. Compared to the same quarter last year the value of equity assets fell by €3.4 billion, which equates to a year-on-year drop of 7.9%.

There was a net issuance of both short and long-term debt securities (AF.3) amounting to €8.8 billion in quarter 1 that resulted in an inflow of cash to the Exchequer. The growth in AF.2 assets of €8.0 billion in the first quarter of 2019 is largely explained by this new borrowing (Tables 5 and 6).

The GDP figures used in the current publication are consistent with those published in the latest National Income and Expenditure Accounts published on 11 July 2019.

The population estimates used in calculating the debt per capita data in Figure 3 are the previous years' mid-April estimates of population except for the year 2017 where the 2016 census of population figure is used (see Statbank table PEA15: Annual Population Change by Component and Year).

Revisions to Government Data since EDP

Revisions to General Government Net Worth: Revisions have been made to Net worth figures. These revisions are due to increased availability of data. See Tables 2 and 6.

Depreciation (P51c): Revisions have been made to the P51c data for 2014 to 2018 due to increased availability of data, this is in line with the latest National Income and Expenditure Accounts published on 11 July 2019.

Social Benefits in cash (D62): Figures for 2018 have been revised due to the availability of more up-to-date and detailed data sources.

These data are available on the Eurostat website here

This measure is by definition equal to both Total revenue (TR) less Total expenditure (TE), and Net acquisition of financial assets less Net incurrence of liabilities (Tables 1 and 5). In order to respect this accounting identity, a technical adjustment is made to the level of transactions recorded in liability category F32 (long-term debt securities) to eliminate any statistical discrepancy between the two approaches to the calculation of GG deficit/surplus. This adjustment has no impact on Gross debt, Net debt or Net worth.

‘Nominal value’ is defined in the governing regulation as face value. If debt is sold at a discount, it is the undiscounted value of the instrument, rather than the amount actually received, that is shown in the GG debt. In other statistical contexts, ‘nominal value’ means face value plus any interest accrued but not paid; however, such interest is excluded from GG Debt by definition.

D.42 Dividends receivable by the owners of share equities. Dividends exclude "super dividends" which arise where the dividend paid is large relative to the recent level of dividends and earnings. Super dividends are recorded as withdrawal of equity (F.5). This arises, for example, in the case of dividends paid by the Central Bank in 2015.

P.1 Total output of government is equal to market output, own account capital formation, and non-market output (i.e. the sum of D.1+P.2+P51c). The market output referred to in this publication is the imputed market value of social housing rented dwellings. See Table 3.

Scan the QR code below to view this release online or go to
http://www.cso.ie/en/releasesandpublications/er/gfsq/governmentfinancestatisticsquarter12019/