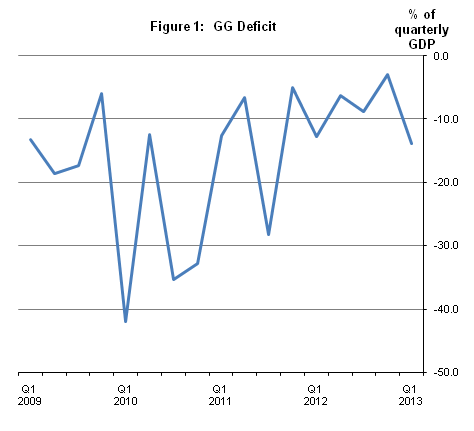 Ireland’s General Government Deficit (GGDeficit) amounted to €5,387 million in the first quarter of 2013 representing 13.8% of quarterly GDP.  This was almost €360 million greater than the corresponding figure for the first quarter of 2012.  Government revenue for the period at €12,821 million was higher than the Q1 2012 revenue of €11,848 by €973 million (mainly due to increased revenue from taxes and social contributions).  However expenditure in this quarter amounted to €18,128 million, representing an increase of €1,299 million on the Q1 2012 levels of €16,829 million. This was mainly due to increases in capital transfers (in particular, payments under the Eligible Liabilities Guarantee Scheme related to the liquidation of IBRC) and interest expenditure.

General Government Net Debt for the corresponding period amounted to €154.9 billion or 95.0% of GDP.  This net debt figure is obtained by deducting the value of the financial assets corresponding to those categories of financial liabilities which comprise GGDebt from the gross debt figure.

Fall in Government Net Worth

Net Worth (non-financial assets plus financial assets less liabilities) of General Government continued its recent decline in Q1 2013, falling to -€81.1 billion from -€77.2 billion at the end of the previous quarter (Table 2).

This change is explained primarily by the -€5,387 million GGDeficit incurred in the quarter, offset by holding gains on equity assets of General Government amounting to +€1,368 million (see Table 6 of detailed tables).

Tables 1 and 2 set out the main components of Government revenue and expenditure as well as details of government assets and liabilities.  Additional, more detailed tables are available at http://www.cso.ie/en/releasesandpublications/nationalaccounts/governmentfinancestatistics/. 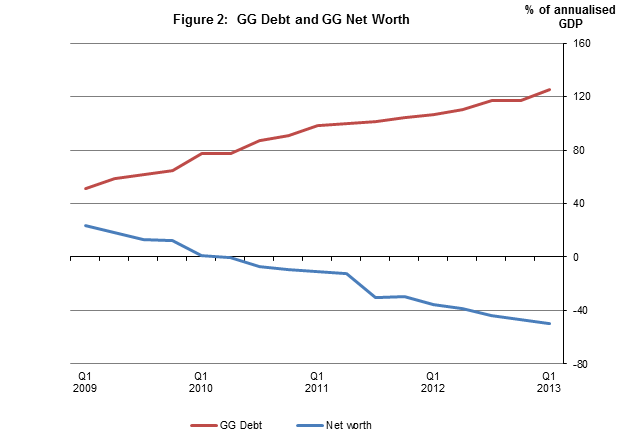 Detailed statistics on Government revenue, expenditure and financial flows and stock positions are also provided to Eurostat under the ESA95 transmission programme.  For quarterly data the main tables reported are:

General Government Deficit/Surplus (GGDeficit) is the standard European measure of the fiscal balance, which is used to monitor compliance with the Stability and Growth Pact.  It is the difference between the revenue and the expenditure of the general government sector. The government deficit data related to the EDP (EDP B.9) differs from the deficit according to ESA95 (B.9) in the treatment of interest relating to swaps and forward rate agreements.

General Government Debt (GGDebt) is defined in the EU regulations implementing the Maastricht Treaty as the gross debt liabilities of the consolidated General Government sector, at nominal value.
‘Gross’ means that the value of any financial assets held by General Government cannot be deducted from the GGDebt. In Ireland’s case, this means that the liquid assets which are deducted from the ‘gross’ National Debt in arriving at the audited National Debt cannot be deducted from the GGDebt.
‘Debt liabilities’ are defined as the ESA categories AF.2 (Currency and deposits), AF.33 (Securities other than shares, excluding financial derivatives), and AF.4 (loans).
This definition excludes liabilities in derivatives (AF.34), equity liabilities (AF.5), pension and insurance liabilities (AF.6) and accounts payable (AF.7).
‘Consolidated’ means that any money owed by one entity within General Government to another is excluded from the total GGDebt.
‘Nominal value’ is defined in the governing regulation as face value. If debt is sold at a discount, it is the undiscounted value of the instrument, rather than the amount actually received, that is shown in the GGDebt. In other statistical contexts, ‘nominal value’ means face value plus any interest accrued but not paid; however, such interest is excluded from GGDebt by definition.

ESA95 codes as given in the tables of this release and an explanation of each code are shown below for the main components of Government revenue and expenditure as well as for types of financial flows. More detailed codes and technical definitions can be seen in the ESA95 manual available at http://circa.europa.eu/irc/dsis/nfaccount/info/data/esa95/en/esa95en.htm.

Main Components of General Government Expenditure and Revenue
P.2      Intermediate consumption – value of goods and services used in the process of production, excluding
fixed assets
P.5      Gross capital formation
P.51 Gross fixed capital formation - acquisitions, less disposals, of fixed assets during a given period
plus certain additions to the value of non-produced assets realised by productive activity. Fixed assets
are tangible or intangible assets produced as outputs from processes of production that are
themselves used repeatedly, or continuously, in processes of production for more than one year
P.52 Changes in inventories
P.53 Acquisitions less disposals of valuables
D.1      Compensation of employees – the total remuneration of government employees
D.11    Wages and salaries, in cash and in kind
D.12    Employers social contributions – actual (D.121) and imputed (D.122)
D.29    Other taxes on production (payable) all taxes that enterprises incur as a result of engaging in
production, independently of the quantity or value of the goods and services produced or sold. These
include taxes on use or ownership of land or buildings, taxes on use of fixed assets, taxes on total
wage bill and payroll, taxes on international transactions related to production.
D.3      Subsidies (payable) - current unrequited payments which general government or the Institutions of
the European Union make to resident  producers, with the objective of influencing their levels of
production, their prices or the remuneration of the factors of production
D.4      Property income (payable) - the income receivable by the owner of a financial asset or a tangible
non-produced asset in return for providing funds to, or putting the tangible non-produced asset at
the disposal of, another unit
D.41    Interest (payable) - excludes settlements under swaps and forward rate arrangements,
as these are treated as financial transactions in the ESA95
D.5      Current taxes on income, wealth, etc, (payable)  - all compulsory, unrequited payments, in cash or in
kind, levied periodically by general government and by the rest of the world on the income and wealth
of units in the economy, and some periodic taxes which are assessed neither on income nor wealth
D.6      Social contributions - transfers to households, in cash or in kind, intended to relieve them from the
financial burden of a number of risks or needs, made through collectively organised schemes, or
outside such schemes by government and non-profit institutions. These include payments from
general government to producers which individually benefit households and which are made in the
context of social risks or needs
D.62    Social benefits in cash - social benefits and pensions paid in cash;
D.631  Social transfers in kind, via market producers - can be subdivided into those where beneficiary
households actually purchase the goods and services themselves and are then reimbursed, and those
where the relevant services are provided directly to the beneficiaries
D.7      Other current transfers
D.9      Capital transfers - involve the acquisition or disposal of an asset, or assets, by at least one of the
parties to the transaction.
K.1      Consumption of fixed capital - the amount of fixed assets used up, during the period under
consideration, as a result of normal wear and tear and foreseeable obsolescence, including a provision
for losses of fixed assets as a result of accidental damage which can be insured against.

The redemption of the promissory notes previously assigned to the Irish Bank Resolution Corporation (IBRC) in February 2013 has led to very significant changes in the composition of the GGDebt between Q4 2012 and Q1 2013.

Under the Excessive Deficit Procedure which sets out the rules for calculating GGDebt, the promissory notes were classified as long-term loans (F.42).  Following IBRC’s liquidation in February 2013, the Central Bank acquired IBRC’s promissory note claim on the State (€25,261 million at face value).  This claim was subsequently redeemed by the State in exchange for newly created long term government bonds (‘securities other than shares’, F.332).

This transaction took place at face value, so that it did not change the overall GGDebt.  However, it resulted in an immediate shift in the composition of GGDebt of €25,261 million from long-term loans (F.42) to long-term bonds (F.332).

Promissory notes with an outstanding face value of €227 million assigned originally to EBS and now held by AIB were not affected by the redemption of IBRC’s promissory notes, and continue to be classified in the GGDebt as long-term loan liabilities.

Further changes in these categories have also arisen due to Ireland receiving further monies under the Troika Programme (long term loan – F.42) and to National Treasury Management Agency activity on the bond markets in Q1 2013.

Meanwhile, the only impact on the GGDeficit for Q1 2013 is a minor change in interest payable arising from the difference between the interest rates payable on the promissory notes and those payable on the replacement bonds.

The seven public universities and certain publicly funded fee-paying secondary schools have been reclassified from the Non-profit institutions serving households (NPISH) economic sector to the Non-financial corporations economic sector. This change has been made following an analysis by the CSO that these entities are ‘market producers’ – that is, they cover a majority of their costs through their own sales of education and research services – and has resulted in a number of reclassifications within the expenditure of General Government. Specifically, the changes shift expenditure from D.7 (transfers to NPISH) to a combination of

These changes have been applied retroactively to all quarters, and are consistent with those seen in the recently published CSO National Income and Expenditure 2012 and Quarterly Institutional Sector Accounts releases.

Scan the QR code below to view this release online or go to
http://www.cso.ie/en/releasesandpublications/er/gfsq/governmentfinancestatisticsquarter12013/