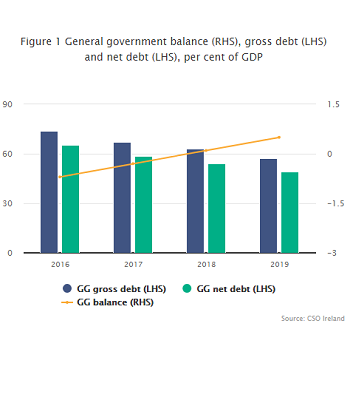 On the assets side of the State’s balance sheet, financial assets decreased by €0.5 billion during 2019. This decline was principally caused by falls of €2.2 billion and €2.4 billion in loans and equity respectively that were offset by a combined rise of €4.1 billion in all other asset classes.

On the liability side of the balance sheet, total liabilities at market value grew by €1.9 billion, largely as a result of increased borrowing (currency and deposits, debt securities and loans) of €2.1 billion in the year to end 2019 (Table 6). This growth in debt was partially offset by a reduction in all other liabilities of €0.2 billion.

This release comprises the latest official publication by CSO of annual Government Finance Statistics (GFS) results for years 2014 to 2019.

The data published are consistent with the General Government Deficit and Debt levels reported at end-September 2020 under the EU regulation governing the Excessive Deficit Procedure (EDP). Consequently they may not always be fully aligned with the National Income and Expenditure and related publications such as the Institutional Sector Accounts.

The official publication by Eurostat of deficit and debt levels for all EU member states is 22 October 2020.

The full suite of GFS tables are also available on the CSO website.

The National Accounts IT (NAIT) project has enabled Government Accounts Compilation and Outputs (GACO) Division to review, develop and streamline its data sources and compilation methods. In parallel with this ongoing work, a new Revenue data source for compensation of employees, i.e. pay, (ESA code = D.1) has become available to the CSO. Pay As You Earn Modernisation (PMOD) is a more comprehensive and timely data from the Revenue Commissioners. This “live” monthly data is processed within the NAIT system. The vastly improved timeliness of this data leads to more real time quarterly estimates of D.1 and provides for consistency between annual and quarterly estimates.  The sub-components of D.1 were revised in this methodological review - Imputed Employer Pension Contributions (D.1221); Imputed Employer Non-Pension Contributions (D.1222) for the whole economy and government employee social contributions. The historical quarterly profile has been revised in line with public service numbers using the Denton method. This review has culminated in a robust method for the compilation of the components of D.1 for General Government (2011-2019) that is consistent with estimates of D.1 for other sectors of the economy.

For NIE 2019, expenditure under the 'Early Childhood Care and Education Programme' (ECCE) was reclassified from P.2 to D.632 from 2011 onwards. Other changes to the D.632 figures reflect updated data for local authority housing payments and free fees payments to universities.

Estimates of the general government debt have been revised since April 2020.  Revisions are due to improved compilation processes and, for recent years, also reflect the availability of more up-to-date and detailed data sources.

Super dividend: In 2019 Q2 the exchequer received a super dividend of €1,653 million from the Central Bank of Ireland.

IBRC payment to Exchequer: In 2013 the payment by the Exchequer of €1.1 billion to meet obligations to IBRC deposit holders under the guarantee schemes in operation was treated as the granting of a loan from the Exchequer to IBRC, on the understanding that the Exchequer would be treated as a creditor of IBRC in the liquidation process and that there was a reasonable expectation of repayment. In quarter 4 2019 €681.7 million was repaid to the Exchequer.

Consultants pay settlement: In June 2018 there was a settlement made following a court process with medical consultants in relation to pay arrears.  The backdated payments of €104 million were recorded as D.99 expenditure of central government in Q3 and Q4 2019.

At the end of 2019 the value of the State's assets in Equity and Investment Fund Shares (AF.5, Table 6) stood at €34.7 billion, representing a year-on-year fall of €2.4 billion since Q4 2018. This drop in value was driven almost entirely by a reduction in holdings in this asset class of €2.4 billion (Table 5) as holding gains/losses were largely neutral over the same period (Tables 5 and 6).

On the other side of the balance sheet the market value of the State's liabilities grew by €1.9 billion during 2019. This was mainly driven by an increased indebtedness through deposits and bonds (AF.2 and AF.3) that was offset by repayments of the UK bilateral loan of €1.2 billion in this period.

European GFS, including EDP statistics, are produced according to the legally binding accounting rules of the European System of Accounts (ESA2010). The Manual on Government Debt and Deficit (MGDD) provides further guidance on the implementation of ESA2010 in the context of GFS.

General government balance is the standard European measure of the fiscal balance, which is used to monitor compliance with the Stability and Growth Pact.

Scan the QR code below to view this release online or go to
http://www.cso.ie/en/releasesandpublications/er/gfsa/governmentfinancestatisticsoctober2020/