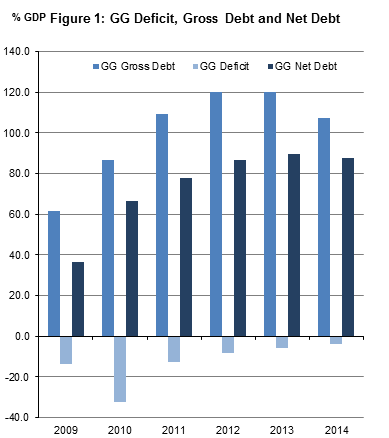 General Government experienced a deficit of -€7,331 million (-3.9% of GDP) in 2014 - an improvement on the 2013 position of -€10,153 million (-5.7% of GDP).Government revenue increased by over 6% from €61,038 million in 2013 to €64,971 million in 2014.  Expenditure increased by a lesser proportion of 1.6%, from €71,192 million to €72,302 million over the same period (Table 1). The changes in revenue were primarily driven by increases in tax and social contribution revenues partially offset by reductions to net investment income and income from non-market sales, including bank guarantee fees. The changes in expenditure are mainly reflected in increased capital expenditure activity.

Taxes and social contributions continue to form the largest component of revenue over the period, representing 88% of total government revenue in 2014, with social benefits, the biggest expenditure category, accounting for almost 39% of government spending in 2014.

The results in this release are presented under the ESA 2010 standards. See text box below and Background Notes for further information.

This detailed release along with the headline figures published on 12 October 2015 together comprise the latest official publication by CSO of annual Government Finance Statistics results for years 2009 to 2014.  First estimates for 2014 were published in April 2015.

The data published in this series are consistent with the General Government Deficit and Debt levels reported at end-September 2015 under the EU regulation governing the Excessive Deficit Procedure (EDP).   Consequently they may not always be fully aligned with the National Income and Expenditure and related publications such as the Institutional Sector Accounts.

The official publication by Eurostat of deficit and debt levels for all EU member states is due on Wednesday 21 October 2015.

The CSO’s Register of Public Sector bodies is updated twice a year to coincide with the submission of government deficit and debt figures to Eurostat under the Excessive Deficit Procedure. It reflects any changes in the composition of the government sector since the previous update. Some additions to the Register since April 2015 include:

1. Irish Water has been classified to Sector S.1311 (Central Government) *.

A detailed explanation of the application of these rules and the most up-to-date list of public sector bodies (including general government bodies) for Ireland is also shown at this link.

In October 2013, the Department of Public Expenditure and Reform announced that Premier Lotteries Ireland had been selected as the licence holder of the National Lottery Licence for a 20 year period.  The actual transfer took place on 30th November 2014. As the licence holder is unable to sell the permit to a third party government is not deemed to have sold an asset.  Rather it is found to have granted permission to limit the number of individual units entitled to engage in this activity and therefore the receipt is to be recorded as ‘other taxes’ (D.29 (e)) over the life of the licence. The present value of the cash received up front in 2014 is recorded in the ‘Other accounts payable’ liability (AF.8) which will in turn be reduced each year by the future tax revenue accruals.

Transfer of pension obligations to government

The Government assumed the pension fund liability of Waterford Crystal under an agreement reached at the end of 2014.  As the liabilities exceed the assets of the scheme, we are required to recognise the difference in the assets and liabilities at the time of the transfer, which we record as expenditure (D.9) capital transfer.  An ‘accounts payable’ (AF.8) liability is recorded in the government accounts at the time of the transfer and as cash payments are made in future periods this liability decreases accordingly.

Other changes since the last release

Estimates of the general government deficit for both 2013 and 2014 have been revised since April 2015. The changes indicate an improvement in the deficit of €166 million and €153 million for each of the years respectively. Because audited accounts for many government bodies become available between April and September, this release allows us to present more final data for 2014 than the provisional outturn previously published. These revisions mainly result in a reduction to net capital transfers (D.9).

The GDP figures used in the current publication are consistent with those published in the National Income and Expenditure 2014.

The figures previously included in Table 6 for the value of off-balance sheet PPPs has been revised for all periods.  This is mainly due to the capital value for a number of projects which were previously reported as the contract value (construction, operation & maintenance, lifecycle and overheads including cost of finance expressed in NPV terms at financial close of the relevant project) being revised to report nominal design and construction value. This was done in order to better align the concepts used in these tables with the concepts used in other reporting of contingent liabilities to Eurostat.

This item refers to the stock of debt of non-government bodies guaranteed by government.  The figure for 2011 has been revised due to the classification of IBRC in the Government Sector which means their borrowings are no longer regarded as external to Government.

The estimated pension liability of government (the accrued liability in respect of Public Service occupational pensions) is a contingent liability of government and does not form part of the ESA accounts of general government.  It is shown in this release as a memorandum item.  The value shown for years 2009-2011 of €116 billion was calculated by the Comptroller and Auditor General.    The value of this liability is reduced by €18 billion to €98 billion with effect from 2012. This follows an actuarial valuation carried out by the Department of Public Service and Reform.   The main reasons for the reduction were the pay and pension cuts since 2009 and the freeze in pay and pension rates until after the Haddington Road Agreement.  Details on this updated estimate can be accessed at:

D.41    Interest receivable by the owners of a financial asset for putting it at the disposal of another institutional unit. Applies to deposits (AF.2), debt securities (AF.3), loans (AF.4) and other accounts payable (AF.8)

Scan the QR code below to view this release online or go to
http://www.cso.ie/en/releasesandpublications/er/gfsa/governmentfinancestatisticsoctober2015/