Investment in foreign securities rises to €2.3 trillion at end of 2016 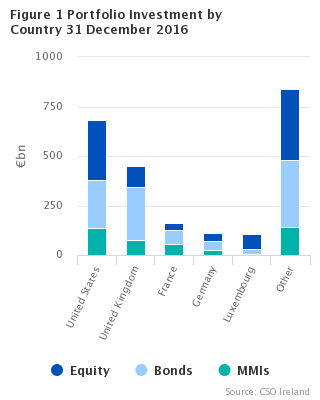 The value of Irish residents’ holdings of foreign securities at end-December 2016 amounted to €2,349bn, up €193bn on the 2015 level of €2,156bn. The increase is largely accounted for by increases in bonds and notes and in equity assets.

Combined investment in US-issued and UK-issued instruments (€1,132bn) accounted for 48 per cent of the total stock, up from 46 per cent on 2015.

Other points of note from the end 2016 results are:

This release also provides analysis by country of issuer and sector of holder (table 2).  Corresponding data for 2015 are shown including revisions resulting from more recent information. Overall, the data are compatible in form and content with the data being submitted to the International Monetary Fund (IMF) as part of Ireland’s on-going participation in the IMF’s world-wide annual Coordinated Portfolio Investment Survey. They are also consistent with the portfolio investment stock statistics published on the 15th September 2017 in the Release Quarterly International Investment Position and External Debt – Quarter 2 2017 – see Background Notes.  More detailed geographical analysis is available on the CSO STATBANK.

This Release updates the annual (end-December) series on foreign portfolio asset stock statistics introduced in October 2003. These figures result from the CSO’s ongoing participation in the annual Co-ordinated Portfolio Investment Survey (CPIS) conducted by the IMF. The information is compiled on the basis of the IMF’s methodological recommendations described in its Co-ordinated Portfolio Investment Survey Guide. This methodology is designed to harmonise the timing and valuation conventions used by all countries participating in the Survey. The results are conceptually consistent with the International Investment Position (IIP) statistics on foreign assets published by the CSO. Therefore, the compilation methodology, which is designed to meet the recommendations of the IMF’s Balance of Payments Manual - 6th Edition (BPM6) concerning compilation of international investment position statistics, is essentially the same for both series.

The CPIS is concerned with portfolio investment stock statistics for equities and long-term (i.e. bonds and notes) and short-term (i.e. money market instruments) debt securities. The results are classified by country of issue of the securities and are also cross-classified by type of financial instrument, and by sector of holder.

Scan the QR code below to view this release online or go to
http://www.cso.ie/en/releasesandpublications/er/fps/residentholdingsofforeignportfoliosecurities2016/