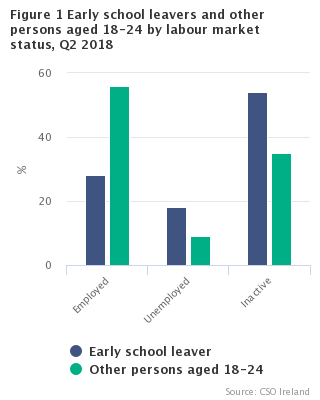 Younger age groups reported the highest levels of third level attainment with over half of the 25-34 and 35-44 year olds have a third level qualification (56% and 54% respectively) compared to just three in ten (29%) 60-64 year olds. This reflects increased levels of participation in third level education over time. See Table 2.1 and Figure 2.

The gap between males and females is more evident in younger age groups. Females aged 20-24 and 25-34 years olds were more likely to have a third level qualification in Q2 2018 with rates of 32% and 60% respectively.  The equivalent rates for males were 22% for the 20-24 age group and 52% for the 25-34 age group. This gender gap continues in older age groups but to a lesser extent. There was a 4 percentage point difference between the genders at the 55-59 age group and a 5 percentage point difference between the 60-64 age group.

The percentage of males with primary education/no formal education halved in the last ten years from 14% in Q2 2009 to 6% in Q2 2018. The corresponding proportion of females dropped from 11% to 5%.

Almost one in ten persons (9%) aged 25-64 years old in the Border region had a primary level education or no formal education in Q2 2018. Conversely, only 3% of persons had a primary education level or below in the South-West. See Table 5 and Map 1.2.

Education level and the labour force

Unemployment rates for those aged 25-64 years old clearly decreased as the level of education attained increased. In Q2 2018, males aged 25-64 years old with a primary education or below were over three times as likely to be unemployed (15%) compared to males with a third level qualification (4%). The corresponding values for females in Q2 2018 were 11% and 4%. See Table 5.2 and Figure 5.2.

The labour force participation rate is the number of persons in the labour force expressed as a percentage of the total population.  In Q2 2018, females aged 25-64 years old with a third level qualification were over two times as likely to be in the labour force (85%) compared to females with a primary education or below (29%). The corresponding values for males in Q2 2018 were 93% and 51% respectively. See Table 5.3.

The latest available EU figures showed that in 2017 11% of all 18-24 year olds in the EU-28 member states were classified as early school leavers. The Irish equivalent rate was 5% in the same period. This ranked the country fourth lowest among EU member states. See Table 6.1 and Figure 6.1.

The latest available EU figures showed that in 2017, 83% of all 20-24 year olds in the EU-28 member states had attained at least a higher secondary level of education. The corresponding figure for Ireland was 94%, ranking the country second among EU member states. See Table 7.1 and Figure 7.1.

From 2003, a gap between the genders has emerged, resulting in three in five females (60%) with a third level qualification compared to just over half (53%) of males as of Q2 2018.

Show Table 7.1 Percentage of persons aged 20-24 with at least a higher secondary education in EU member states, classified by sex, 2017

The Labour Force Survey (LFS) replaced the Quarterly National Household Survey (QNHS) at the beginning of Q3 2017. The survey meets the requirements of Council Regulation (EC) No. 577/98, adopted in March 1998, which requires the introduction of quarterly labour force surveys in EU member states.

The primary purpose of the LFS is the production of quarterly labour force estimates. Questions on educational attainment are included in the core LFS questionnaire each quarter. This report is based on those questions.

Since the publication of the Educational Attainment Thematic Report 2017, the LFS dataset has been adjusted to mitigate the effect of the introduction of the LFS on the coherence of the historic data series. Scaling factors for regions, occupation groups and highest level of education completed were created and applied to the previously published LFS data.

You can find greater detail in the following information notes:

This report is based on both rounds of back-casted QNHS data which was also adjusted for the 2016 Census data.

For this release, educational attainment results are presented for each year using data from Quarter 2 (i.e. April-June).

Percentage breakdowns exclude cases where the interviewee did not state their educational attainment.

The sum of row or column percentages in the tables in this report may not add up to 100 due to rounding.

Many international statistical organisations use the 15-64 years age range as a standard working age population. However, the majority of persons aged 15-24 years old are students and this cohort has been steadily increasing as most continue their studies into tertiary education. Data presented in this report will mainly focus on the educational attainment of the 25-64 year age group, unless otherwise specified.

Early school leavers are defined as persons aged 18 to 24 whose highest level of education attained is lower secondary or below and have not received education (either formal or non-formal) in the four weeks prior to the survey.

This classification is derived from a single question and refers to educational standards that have been attained and can be compared in some measurable way. The question is included in the core LFS questionnaire on an ongoing basis and is phrased as follows: “What is the highest level of education or training you have ever successfully completed?”

There are two methods of presenting results for educational attainment; the International Standard Classification of Education (ISCED) and the National Framework of Qualifications (NFQ).

UNESCO developed the International Standard Classification of Education (ISCED) to facilitate comparisons of education statistics and indicators across countries on the basis of uniform and internationally agreed definitions. The current revision of ISCED used in this release is ISCED 2011 (ISCED11).

For information on the ISCED11 classification, see:

The NFQ was launched in 2003 and it is now the single structure mechanism for recognising all education and training in Ireland. All framework awards now have an NFQ Level, numbered from 1 to 10, which tells you about the standard of learning and an NFQ Award-Type which tells you about the purpose, volume and progression opportunities associated with a particular award. Quality and Qualifications Ireland (QQI) has responsibility to develop, promote and maintain the Irish NFQ.

In this release educational attainment results are presented using a descriptive name and the corresponding NFQ levels.

For information on the NFQ see:

The classification of educational levels in the QNHS was revised in Q2 of 2009 in order to facilitate the linking of education categories to the NFQ, while also retaining links with the international education classification, ISCED. The change was made in the third level qualification categories to separate the attainment of Ordinary degrees from Honours Bachelor degrees. Because of this detailed results prior to Q2 2009 are not directly comparable with results from Q2 2009 onwards.

The primary classification used for the QNHS results is the ILO (International Labour Office) Labour Force classification. The ILO classification distinguishes the following main subgroups of the population aged 15 and over:

The rates given in this release are based on the ILO classification.

The Principal Economic Status (PES) classification is based on a single question in which respondents are asked what is their usual situation with regard to employment and given the following response categories:

The EU-28 comprises the following 28 countries:

The EU-15 is a subset of the EU-28 and includes the following 15 countries:

Scan the QR code below to view this release online or go to
http://www.cso.ie/en/releasesandpublications/er/eda/educationalattainmentthematicreport2018/