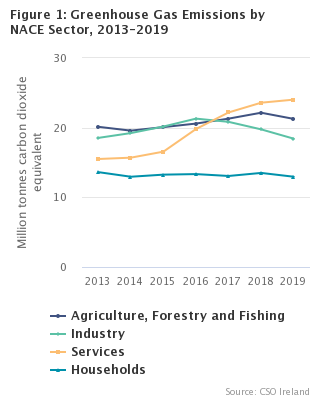 Greenhouse gas emissions from Agriculture, Forestry and Fishing were at their highest of the period 2013-2019 in 2018 at 22.1 million tonnes of carbon dioxide equivalent. Emissions from the sector increased in each year from 2015 to 2018 inclusive, then fell by 4% in 2019. The trend can be observed in Figure 1 and Table 1.

The Services sector includes air and road transport services, and is therefore strongly affected by the residence principle adjustment. Carbon dioxide emissions from Irish airlines operating abroad have a large impact on the level of emissions attributed to the Services sector. Greenhouse gas emissions were at their highest of the period 2013-2019 in 2019, at 24.0 million tonnes of carbon dioxide equivalent. Emissions from this sector rose in each year from 2013 to 2019 inclusive (see Figure 1 and Table 1).

Emissions from Households were 13.0 million tonnes of carbon dioxide equivalent in 2019, a decrease of 4% on 2018 and almost exactly equal to emissions in 2014 which were the lowest of the period 2013-2019 (see Figure 1 and Table 1). Household emissions are mainly due to transport and heating. In 2019 emissions from the Household sector fell due to a decrease in emissions from household heating.

Carbon dioxide was mainly emitted by the Services, Industry and Household sectors in 2019, with 44% of emissions coming from the Services sector.

The Agriculture, Forestry and Fishing sector was responsible for 93% of methane emissions and 93% of nitrous oxide emissions in 2019. Fluorinated gases were mainly emitted by the Industry, Household and Services sectors.

Data on emissions by resident units of the air pollutants sulphur oxides, nitrogen oxides, ammonia, carbon monoxide, non-methane volatile organic compounds, fine particulate matter (PM2.5) and larger particulate matter (PM10) are shown in Tables 6-12. Emissions of all air pollutants fell in 2019, with large reductions seen in emissions of sulphur oxides (26%) and carbon monoxide (17%) in particular, due mainly to decreases in emissions from household heating and from the energy supply sector, NACE 35.

The NACE sector share of each air pollutant in 2019 is shown in Figure 3. Households were the source of 61% of sulphur oxide emissions, 67% of carbon monoxide emissions and 64% of emissions of fine particulate matter (PM2.5). Each of the four sectors was responsible for a substantial share of emissions of nitrogen oxides. The Agriculture, Forestry and Fishing sector was the source of 99% of ammonia emissions and 40% of emissions of non-methane volatile organic compounds (NMVOCs). Larger particulate matter (PM10) was mainly emitted by the Industry sector, the Agriculture, Forestry and Fishing sector, and the Household sector.

The NACE sector distribution of emissions by resident units of each of the seven air pollutants presented in this release is provided in Tables 6-12.

Greenhouse gas emissions by different gases are compared using the global warming potentials (GWPs) for a 100-year time horizon from the Intergovernmental Panel on Climate Change (IPCC) Fourth Assessment Report of 2007. The GWP is a measure of the global warming effect of a given mass of a greenhouse gas compared with the global warming effect of the same mass of carbon dioxide. The GWP for methane is 25 and that of nitrous oxide is 298. The GWPs of fluorinated gases vary, but many are in the thousands or tens of thousands. In this release fluorinated gas emissions are presented in units of carbon dioxide equivalent.

Sulphur oxides (SOx) are formed when sulphur-containing fuels (mainly coal and oil) are burned in power stations. Household heating is one of the main sources of sulphur dioxide emissions in Ireland. Exposure to high concentrations of SOx can lead to breathing difficulties for people with long-term respiratory conditions such as asthma.

Nitrogen oxides (NOx) are produced during combustion at high temperatures and by agricultural activity; the main sources in Ireland are vehicles, power stations, inorganic fertilisers and animal manure. The industrial sector is also a significant contributor to NOx levels, particularly the cement production industry.  Exposure to NOx is linked to adverse respiratory effects, and long-term exposure increases the risk of respiratory infection in children.

In some cases, there is a one-to-one correspondence between the CRF/NFR codes and a NACE Rev. 2 sector. If so, the total emissions from this CRF/NFR code are attributed to that NACE Rev. 2 sector.  However in many cases, a single CRF/NFR corresponds to more than one NACE sector.  In these cases, emissions are assigned to NACE sectors by the CSO using data on transport and non-transport energy use by NACE from the CSO's Business Energy Use survey.

On the other hand, emissions from fuel sales to owners of non-Irish registered vehicle in Ireland are included in the inventory as territorial emissions but are excluded from air emissions accounts.

We compile the air emissions data presented in this release using the "inventory-first" approach. In following this approach, we take the national inventory totals as a starting point, make a residence principle adjustment, and allocate resident emissions to NACE categories and households.

Scan the QR code below to view this release online or go to
http://www.cso.ie/en/releasesandpublications/er/eaae/environmentalaccountsairemissions2019/