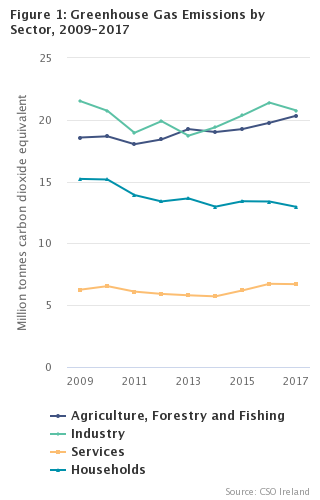 The industry sector produced the largest share of greenhouse gas emissions in all years from 2009-2017 except 2013. In 2017 this share was 34.2% of the total with emissions from agriculture, forestry and fishing at 33.5%, household emissions at 21.3% and emissions from the services sector at 11.0%.

Emissions from the industry sector decreased in 2017 to 20.8 million tonnes of carbon dioxide equivalent, having increased each year from 2014 to 2016. The lowest emissions of the period were in 2013 at 18.7 million tonnes of carbon dioxide equivalent. The decrease in emissions in 2017 was due to a fall in emissions from the energy supply sector, NACE 35, which accounted for 54% of industry emissions in 2017 (see Figure 1 and Table 1).

Figure 2 shows carbon dioxide equivalent emissions of each of the greenhouse gases by NACE sector. Tables 2-4 provide a breakdown of tonnes of carbon dioxide, methane and nitrous oxide emissions by NACE.

The agriculture, forestry and fishing sector was responsible for 92.4% of methane emissions and 93.3% of nitrous oxide emissions in 2017, while fluorinated gases were mainly emitted by the industry, household and services sectors.

The sector share of each air pollutant in 2017 is shown in Figure 3. Sulphur dioxide emissions were mainly from industry and households. Each of the four sectors was responsible for a substantial share of emissions of nitrogen oxides. The agriculture, forestry and fishing sector was the source of 99.1% of ammonia emissions and 41.3% of emissions of non-methane volatile organic compounds (NMVOCs). Households emitted 19.6% of NMVOC emissions, 57.4% of carbon monoxide emissions and 59.6% of emissions of small particulate matter (PM2.5). Larger particulate matter (PM10) was mainly emitted by the industry sector, the agriculture, forestry and fishing sector, and the household sector.

The NACE sector distribution of emissions of each of the seven air pollutants presented in this release is provided in Tables 5-11.

The national emissions inventories produced annually by the Environmental Protection Agency present emissions of greenhouse gases and air pollutants according to the territorial principle, i.e. they include emissions originating from the geographic territory of Ireland.

Air emissions accounts are compiled according to national accounts principles. They record emissions arising from the activities of resident units of Ireland, regardless of where these emissions occur geographically. The data presented in the headline table and in Tables 1-13 are territorial emissions, while provisional data on residence principle emissions are shown in Table 14. Further information is provided in the background notes to this release.

The air emissions accounts classify emissions of greenhouse gases and air pollutants by emitting economic sector, and by households.

This release incorporates revisions to the air emissions estimates previously published by the CSO, including the revisions made by the EPA to the annual national air emissions inventories. Data from the CSO's Business Energy Use (BEU) survey were used in this release for the first time to determine the NACE distribution of emissions. The BEU survey is carried out annually by the CSO and it is supplemented with a broad range of administrative data during its processing e.g. EPA and SEAI data. The BEU estimates are published in both quantity and monetary terms. The quantity data were used to distribute the emissions by NACE sector in this release. While this involves major revisions to the data published in previous releases, the quality of the NACE estimation is greatly improved by the incorporation of the BEU survey data.

Sulphur dioxide (SO2) is a gas which is formed when sulphur-containing fuels (mainly coal and oil) are burned in power stations. Exposure to high concentrations of SO2 can lead to breathing difficulties for people with long-term respiratory conditions such as asthma.

Nitrogen oxides (NOx) are produced during combustion at high temperatures and by agricultural activity; the main sources in Ireland are vehicles, inorganic fertilisers and animal manure, and power stations. The industrial sector is also a significant contributor to NOx levels, particularly the cement production industry.  Exposure to NOx is linked to adverse respiratory effects, and long-term exposure increases the risk of respiratory infection in children.

On the other hand, the road transport emissions of a German tourist driving in Ireland are included in the inventory as territorial emissions but are excluded from air emissions accounts.

The air emissions data presented in this release are compiled using the "inventory-first" approach. This approach takes the national inventory totals as a starting point, makes a residence principle adjustment, and allocates resident emissions to NACE categories and households. The adjustment to resident emissions is challenging and data collection on this aspect of the accounts is still in development. However, in Table 14 of this release there are provisional data on transport emissions by Irish residents abroad and non-residents in Ireland.

Scan the QR code below to view this release online or go to
http://www.cso.ie/en/releasesandpublications/er/eaae/environmentalaccountsairemissions2017/