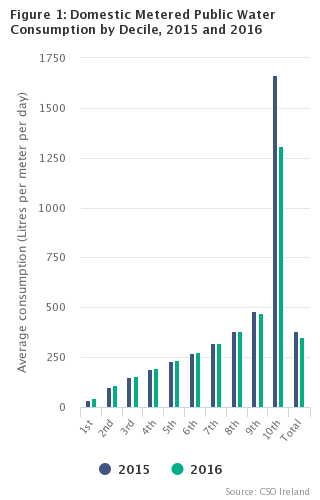 Table 4A shows the monthly average consumption per meter per day by county. Cavan had the lowest average consumption in 2016 at 298 litres compared with Offaly which had the highest annual average of 398 litres. The corresponding medians and number of meters are given in Tables 4B and 4C.

The data used to compile this release were received by the CSO from Irish Water in response to a request made under the Statistics Act, 1993.

All figures are subject to revision. Water meters can store data for previous readings and they are typically read using drive-by technology. Not all meters may have been read for the full release period e.g. if the last data collection for an area was done during December then data for December will not be available until the meter is read again and the data are made available to the CSO. Therefore a full year's data may not be available for some meters.

Table 2 in the release examines the impact of using consumption thresholds to exclude data that are unusually high. These thresholds show the substantial impact that high usage has on the average consumption figures. Typically, high consumption is due to a leak.

The data used in this release only cover metered usage. Apartments, many group water schemes, and abstractions from wells are not included. The 2016 data are based on 691,453 meters. Data from meters are included provided a full month’s data could be calculated from the meter readings. Some meters may not have been read during 2016.

In a small number of cases, a meter was read more than twice in a month. In these cases the CSO has used the first and last readings in a month to calculate monthly consumption.

Meter readings that were irregular in the series, e.g. readings lower than previous readings, have been excluded. Before excluding any readings, the CSO has examined in detail the series of readings for meters where there was a decrease of 500 cubic metres or more between two readings. The higher reading was excluded if it was the irregular reading in the series.

The CSO has converted the readings into monthly usage figures by allocating the difference in two readings proportionately between the dates that the meters were read. Months with partial data have been excluded e.g. if the last reading for a meter was during December, and there were no meter readings available yet from the following year, then that month was excluded.

There was a relatively small number of meters installed in Dublin 17 and Dublin 24. No meter data were available for Dublin 10.

Scan the QR code below to view this release online or go to
http://www.cso.ie/en/releasesandpublications/er/dmwc/domesticmeteredpublicwaterconsumption2016/