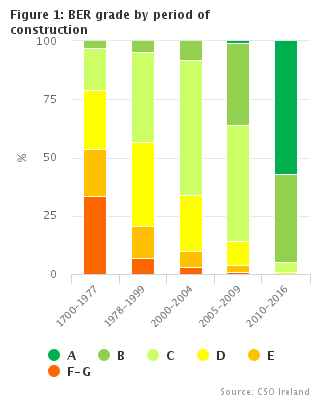 Detached houses and semi-detached houses were the most common dwelling types to be audited since 2009, each representing 26% of the total number of audits. They also had similar energy ratings with approximately 50% of each dwelling type receiving a rating of “C” or higher (see Table 3).

Electricity was the main space heating fuel used in most types of apartments that were audited, followed closely by Mains Gas (see Table 10). In contrast, a majority of houses (70%) and detached houses (71%) used Heating Oil.

Detached houses at 156 square metres had the highest average floor area (see Table 11). Dwellings constructed in the period 1900-1929 had the highest average primary energy use (409 kWh/m2/year), as well as, average carbon dioxide emissions (101 kgCO2/m2/year). Dwellings built in the last six years had the lowest figures for these two attributes (see Tables 12 and 13).

Table 15 examines the representativeness of dwellings that have a BER rating. The data were weighted up to national level using Census of Population 2011 figures. The national level data shows that 45% of dwellings would have received a rating of “C” or higher compared with 50% of dwellings in the actual BER data (see also Figure 3).

There were 663,053 unique domestic BERs (one per dwelling) completed in the period 2009 to the end of December 2016. This compares with around 1.66 million occupied private households enumerated in the 2011 Census of Population. The 2011 Census of Population included questions on county of location of the dwelling, the period when the dwelling was built, and the type of dwelling. These questions can be used to weight the BER data to national level. Table 15 presents an initial weighting of BERs up to national level of non vacant households using the 2011 Census of Population. The weights were calculated by dividing the number of non vacant households in the Census by the number of unique BER households. In cases where a household had more than one BER carried out in the period 2009-2015 only the most recent BER was used. Around 7% of Census households were excluded because there were no BER households in the particular stratum e.g. detached houses in Dublin 1 that were constructed in the period 1919-1945. A stratum was classified as a unique combination of County (52 categories - Dublin postal districts were distinguished), period of construction (nine categories) and dwelling type (four categories). The BER contains more disaggregated dwelling types, e.g. mid-terrace house, but these had to be aggregated to correspond to the Census classification.

Tables 2-13 only include the latest BER published for each dwelling from January 2009 to December 2016; hence the total number of BER certificates is lower than the total in Table 1.

Table B contains a provisional listing of routing keys by county. The list is indicative only as it is not based on an analysis of the full Eircode database. Dwellings were assigned to an Eircode routing key based on their An Post principal postal town span of delivery rather than on the actual geographical location of the dwelling.

Table B: Provisional listing of routing keys by County

Scan the QR code below to view this release online or go to
http://www.cso.ie/en/releasesandpublications/er/dber/domesticbuildingenergyratingsquarter42016/