The number of BER audits performed in certain months have been adversely impacted by the COVID-19 pandemic. For further information please see the SEAI website. 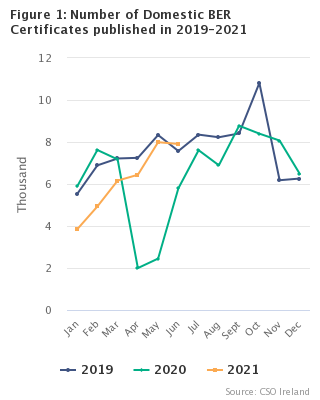 1Dwellings with BERs have been weighted using 2016 Census of Population data to estimate a BER profile for All Dwellings at National level (see Background Notes).

There were 949,565 unique domestic BERs (one per dwelling) completed in the period 2009 to the end of June 2021. This compares with around 1.7 million occupied private households enumerated in the 2016 Census of Population. The 2016 Census of Population included questions on county of location of the dwelling, the period when the dwelling was built, and the type of dwelling. These questions can be used to weight the BER data to national level. Table 15 presents an initial weighting of BERs up to national level of non-vacant households using the 2016 Census of Population. The weights were calculated by dividing the number of non-vacant households in the Census by the number of unique BER households. In cases where a household had more than one BER carried out in the period 2009-2021 only the most recent BER was used. Around 8% of Census households were excluded because there were no BER households in the particular stratum e.g. detached houses in Dublin 1 that were constructed in the period 1919-1945. A stratum was classified as a unique combination of County (52 categories - Dublin postal districts were distinguished), period of construction (nine categories) and dwelling type (four categories). The BER contains more disaggregated dwelling types, e.g. mid-terrace house, but these had to be aggregated to correspond to the Census classification.

Tables 2-13 only include the latest BER published for each dwelling from January 2009 to June 2021; hence the total number of BER certificates is lower than the total in Table 1.

Table 15 is an analysis of BER properties after they have been weighted to 2016 Census  of Population level. It can be compared with the Total row profile in Table 2. See the entry under National representativeness for more details.

Scan the QR code below to view this release online or go to
http://www.cso.ie/en/releasesandpublications/er/dber/domesticbuildingenergyratingsquarter22021/