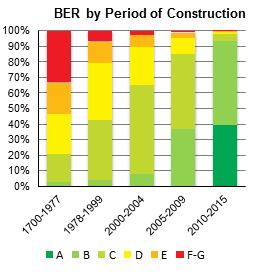 Areas with higher proportions of new dwellings and of apartments tend to have higher ratings. For example, 40% of all dwellings built during 2010-2015 with a BER rating were awarded an A. Mid-floor apartments are more energy efficient and 29% of all mid-floor apartments have an A or B BER rating. Basement dwellings perform poorly with only 3% of all BER rated basements receiving an A or B rating. Some of the most highly-rated dwellings use Wood Pellets and Chips as their main space heating fuel.

This release contains a new experimental analysis of the 139 Eircode routing keys. The Eircode routing keys correspond with An Post’s principal postal towns. The Background Notes in this release contains a table with an indication of the main county locations of each routing key. Table 16 shows the proportion of A-B, C-D, and E-G BER ratings in each routing key for properties that have already been assigned an Eircode (around 61% of dwellings with a BER rating were assigned an Eircode in preparation for the launch of Eircodes). The routing keys allow energy efficiency to be examined at a more detailed level than county. Around 26% of dwellings in routing key T45 (Glanmire and Carrigtwohill) in County Cork had an A or B rating. There are 2,152 dwellings in T45 in the subset of the SEAI file with pre-assigned Eircodes (this represents 28% of the number of dwellings pre-assigned an Eircode in the 2011 Census of Population in this area).

Conversely D03, D06, D07, and D12 all have around 50% of dwellings with an E to G BER rating. Outside of the traditional Dublin Postal Districts, areas E34 (Tipperary Town), E41 (Templemore/Thurles), and R42 (Birr/Banagher) all have relatively high levels of E to G BER ratings.

Table 16 also shows: the number of dwellings with a BER rating that were pre-assigned an Eircode in each routing key area; the average age of those dwellings (this is an important determinant of the rating); and the number of dwellings from the 2011 Census of Population that have been pre-assigned an Eircode (around 95% of Census occupied and vacant dwellings). The relative coverage in each routing key varies widely and this should be taken into account in interpreting the table. For example, an area with a high proportion of rental, recently built, or for sale dwellings would have a higher proportion of BER ratings. Conversely an area with a high proportion of older family farms may have a lower percentage of dwellings with a BER rating and hence the profile may not be fully representative of the whole area.

A Building Energy Rating (BER) is an indication of the energy performance of a dwelling (represented in units of kWh/m2/annum). Actual energy performance will depend on how the occupants operate the dwelling. A BER is based on the characteristics of major components of the dwelling including: wall, roof and floor dimensions; window and door sizes and orientations, as well as the construction type and insulation, ventilation and air tightness features; the system for heat supply (including renewable energy), distribution, and control; and the type of lighting. The BER certificate indicates the annual primary energy usage and carbon dioxide emissions associated with the provision of space heating, water heating, ventilation, lighting, and associated pumps and fans. The energy use is calculated on the basis of a notional family with a standard pattern of occupancy - hence data in this release giving average primary energy use or carbon dioxide emissions are not based on actual data. A BER only covers electricity used for heating, lighting and ventilation with associated pumps and fans. Electricity used for cooking, refrigeration, laundry and other appliance use are not included.

BERs are conducted for around 85,000 domestic dwellings each year. Hence there were 551,000 unique domestic BERs (one per dwelling) completed in the period 2009 to the end of June 2015. This compares with around 1.66 million occupied private households enumerated in the 2011 Census of Population. The 2011 Census of Population included questions on county of location of the dwelling, the period when the dwelling was built, and the type of dwelling. These questions can be used to weight the BER data to national level. Table 15 presents an initial weighting of BERs up to national level using the 2011 Census of Population. The weights were calculated by dividing the number of households in the Census by the number of unique BER households. In cases where a household had more than one BER carried out in the period 2009-2015 only the most recent BER was used. Around 7% of Census households were excluded because there were no BER households in the particular stratum e.g. detached houses in Dublin 1 that were constructed in the period 1919-1945. A stratum was classified as a unique combination of County (52 categories - Dublin postal districts were distinguished), period of construction (nine categories) and dwelling type (four categories). The BER contains more disaggregated dwelling types, e.g. mid-terrace house, but these had to be aggregated to correspond to the Census classification.

In mid-2015 the Census and BER files were allocated Eircodes. This makes it possible to match both files at household level as postcodes are unique at letter-box level. This will create an opportunity to calculate weights in a more precise manner. For this release we have added a new Table 16 (see below for more details).

Tables 2-13 only include the latest BER published for each dwelling from January 2009 to June 2015; hence the total number of BER certificates is lower than the total in Table 1.

The following table contains a provisional listing of routing keys by county. The list is indicative only as it is not based on an analysis of the full Eircode database. Dwellings were assigned to an Eircode routing key based on their An Post principal postal town span of delivery rather than on the actual geographical location of the dwelling.

Scan the QR code below to view this release online or go to
http://www.cso.ie/en/releasesandpublications/er/dber/domesticbuildingenergyratingsquarter22015/