Estimates of the Capital Stock of Fixed Assets 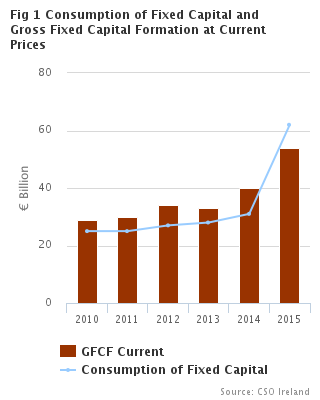 Following corporate restructuring, both through imports of individual assets and also reclassifications of entire balance sheets, combined with an increase in the number of new aircraft imports into Ireland, the gross value of the stock of produced assets was €1,088bn at the end of 2015 - see Table 5.

The net stock of assets increased almost 60% in 2015 with additional intellectual property products and aircraft arising from new imports and corporate restructuring. Due to confidentiality constraints and the risk of disclosing individual data the asset categories intangible fixed assets, research and development and transport equipment have been suppressed. Together transport equipment and intangible fixed assets amounted to €356bn at the end of 2015, an increase of €254bn on the 2014 level. These categories now make up 47% of the net stock of assets, compared with 21% in 2014.

All industrial and service sectors with the exception of Mining and Quarrying recorded an increase in the current value of their fixed assets. Some sectors showing notable increases include: Real estate activities (which includes dwellings) +€17bn; Information and communication +€6bn - see Table 1.

This release belongs to the annual series providing estimates of the values of the stocks of fixed assets according to the European System of Accounts 2010 (ESA 2010) methodology. The capital stocks are estimated using a Perpetual Inventory Method.  In this system the level of stocks are derived from the investment amounts which were made over the preceding years. The annual investments are depreciated by a depreciation function to obtain “net” values (i.e. net of depreciation).  The investments are also revalued in the process to update them from their prices in the historical year in which they were purchased to the year for which estimates are being made.

Revisions arise as amendments are made to the investment amounts i.e. to Gross Fixed Capital Formation (GFCF) in the national accounts.  Revisions also arise from improved sources or estimation methods.  Data relating to the most recent year are also added to the series.

The two most common valuation methods for fixed capital assets are Gross and Net.  The gross capital stock represents the value of the stock still in use (i.e. not retired or scrapped) and valued at the price of new capital goods. The term Gross means gross of consumption of fixed capital (the national accounts term for depreciation).  Thus the gross stock of assets ignores decay of assets and considers past investments as new – only retirement is taken into account.  In practice fixed assets normally decline in value over time due to factors such as wear and tear and obsolescence.  Taking this declining value into account together with retirements give rise to the Net value of the stock of assets. Estimates are provided in this release using both valuation concepts.

The stock of assets is generally valued in current and constant prices. Valuation in current prices implies that all the assets accumulated over the years are valued at the prices obtaining in the year for which the estimates are given.  In the case of the gross stock this is the price of new assets.  In the case of the net stock it is the written down price of assets.  Valuation at constant prices represents the stock of capital assets in the price of the stated reference year (2014 in these tables).

Catastrophic losses arise, generally infrequently, due to exceptional events such as acts of war or unusually severe weather conditions.  Some of the severest weather conditions ever experienced in Ireland in living memory occurred towards the end of 2009 and early in 2010.  Considerable flooding took place in 2009 and estimates have been made by which the stock of assets were reduced in 2009 and 2010 to take account of these disasters.

Consumption of Fixed capital (also known as depreciation) automatically becomes available as a by-product of the calculation of the stock of fixed assets in net and gross terms.  Estimates of the consumption of fixed capital are provided in the release in current and constant terms.

All tables are available from the year 1985 in the CSO databank.

Scan the QR code below to view this release online or go to
http://www.cso.ie/en/releasesandpublications/er/csfa/estimatesofthecapitalstockoffixedassets2015/