Prices rise by 0.1% in the year to October 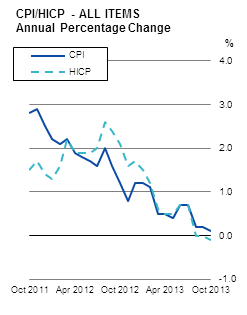 Prices on average, as measured by the CPI, were 0.1% higher in October compared with October 2012.

Consumer Prices in October, as measured by the CPI, decreased by 0.2% in the month. This compares to a decrease of 0.1% recorded in October of last year. The most significant monthly price changes were decreases in Transport (-2.2%) and Restaurants & Hotels (-0.4%). There were increases in Education (+4.4%) and Clothing & Footwear (+1.0%).

Table 17 shows the contribution of each 2-digit COICOP1 division to the overall change in the CPI. A detailed breakdown of the individual components of each of the 12 COICOP divisions is presented in Tables 4 to 15.

The divisions which caused the largest downward contribution to the CPI in the year were Transport (-0.34%), Clothing & Footwear (-0.21%) and Furnishings, Household Equipment & Routine Household Maintenance (-0.20%).

♦    Alcoholic Beverages & Tobacco rose due to higher prices for alcohol sold in off licences and supermarkets and higher tobacco prices.

♦    Housing, Water, Electricity, Gas & Other Fuels rose mainly due to increases in the cost of rents.

♦    Education increased mainly due to an increase in third level education costs.

♦    Transport decreased mainly due to decreases in petrol and diesel and motor car prices.

♦    Clothing & Footwear fell due to clothing and footwear sales.

The divisions which caused the largest downward contribution to the CPI in the month were Transport (-0.32%) and Restaurants & Hotels (-0.06%).

The divisions which caused the largest upward contribution to the CPI in the month were Education (+0.12%) and Clothing & Footwear (+0.05%).

♦    Transport fell mainly due to a decrease in airfares and lower petrol and diesel prices.

♦    Restaurants & Hotels decreased mainly due to a reduction in the price of hotel accommodation.

♦    Education increased mainly due to an increase in third level education costs.

♦    Clothing & Footwear rose due to higher prices for clothing and footwear.

The annual rate of inflation for Services was 1.9% in the year to October, while Goods decreased by 2.1%. Services, excluding mortgage interest repayments, increased by 2.4% in the year since October 2012.

The EU Harmonised Index of Consumer Prices (HICP) decreased by 0.2% in the month, compared to a decrease of 0.1% in October of last year. The most significant monthly price changes were decreases in Transport (-2.4%) and Restaurants & Hotels (-0.5%). There were increases in Education (+4.4%) and Clothing & Footwear (+1.0%).

Approximately 53,000 prices are collected for a representative basket consisting of 632 item headings in a fixed panel of retail and service outlets throughout the country during the week containing the second Tuesday of each month up to and including the third Tuesday of each month.  The dates to which the October index relates are Monday 7th to Tuesday, 15th October 2013.

The CPI measures in index form the monthly changes  in the cost of purchasing  a fixed representative ‘basket’ of consumer goods and services (i.e. Laspeyres formula).  Identical items are priced in the same outlet on each occasion so that changes in the cost of this constant basket reflect only pure price changes.  The current basket of goods and services consists of 632 representative items which were selected as part of the December 2011 rebase and remain unchanged for 2013.  The representative share of each item in the basket is proportional to the average amount purchased by all households in the State and foreign tourists in Ireland based primarily on the 2009/2010 Household Budget Survey (HBS) and estimates of expenditure by foreign tourists across a range of consumer goods and services.  When the new COICOP class (4-digit) level weights were introduced with the January 2013 index, the CPI item weights were also updated.  The CPI item weights were calculated on a pro rata basis using proportions from the December 2011 rebase.

The following items, constituting approximately 8.5% of the Irish CPI expenditure weighting, are excluded from the HICP:

Euro area inflation is measured by the MUICP (‘Monetary Union Index of Consumer Prices’ as defined in Council Regulation (EC) No 2494/95 of 23 October 1995) which is the official euro area aggregate.  The MUICP is calculated as a weighted average of HICPs of the 17 countries in the euro area.  Country weights are computed every year reflecting the country’s share of the household final monetary consumption expenditure in the euro area total.

Covers a wide range of items including hairdressing and other grooming; goods for hygiene, hair and body care; personal goods such as jewellery, handbags and wallets; childcare and other social protection services; insurance, financial services and other services including funerals, weddings, legal and professional services.  The household charge was added to this division, in the CPI, under the item 'miscellaneous goods and services' in April 2012.  The household charge is not included in the HICP.

Scan the QR code below to view this release online or go to
http://www.cso.ie/en/releasesandpublications/er/cpi/consumerpriceindexoctober2013/