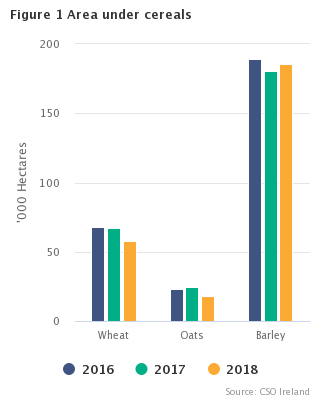 A comparison with the June 2017 results show that:

From the 1st January 2018 an Amendment of the EU NUTS legislation came into effect. This reflects the new regional assembly structure and other changes to the Local Government Act for Tipperary North, Tipperary South and Limerick and Waterford City and Councils. For the composition of the new Regions breakdown and further information see background notes.

Show Table 3 Area under Crops and Pasture in each Region, June 2018

Show Table 4 Number of Cattle in each Region and County, June 2018

Show Table 5 Number of Sheep, Pigs and Other Livestock in each Region, June 2018

This release presents final estimates of land utilisation and livestock numbers in June 2018 at State and regional level. The estimates for sheep and pigs are based on returns from the 2018 June sample survey of agricultural holdings and the June 2018 Pig Survey conducted by the Central Statistics Office (CSO). The estimates for cattle and for crops are obtained from administrative data from the Department of Agriculture, Food and the Marine (DAFM).

Crops  The results for crops are based on data obtained from the DAFM Basic Payment Scheme. Please note that wild bird cover is included under the Other crops category for the first time in the 2018 release. Other crops has been revised for 2016 and 2017 to show comparable figures. The inclusion of this crop in 2016 and 2017 has an  impact on the following estimates for both of these years - Crops, fruit and horticulture, Crops and Pasture and Area Farmed.

Goats  The 2018 goat results are obtained from DAFM’s 2017 December Sheep and Goat Census.

Sheep  The June 2018 results for sheep are based on the trends obtained by comparing the returns from the 2018 sample with the 2017 returns for the same 7,400 farms and applying these trends to the June 2017 figures.

From the 1st January 2018 an Amendment of the EU NUTS legislation came into effect. This reflects the new regional assembly structure and the other changes under the 2014 Local Government Act. These changes included:

The composition of the new Regions breakdown is outlined below.

Scan the QR code below to view this release online or go to
http://www.cso.ie/en/releasesandpublications/er/clsjf/cropsandlivestocksurveyjunefinal2018/