Dublin region accounted for 18% of Ireland's industrial output in 2016 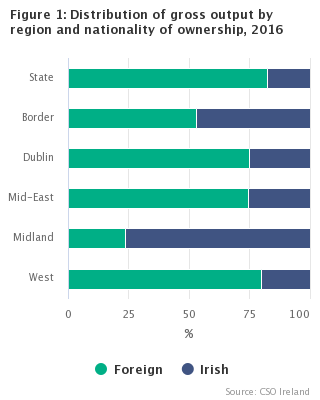 In 2016, the Mid-West, South-East and South-West regions combined produced €112.4 billion or 61.7% of Ireland’s total industrial output.

In Ireland 17.5% of total gross output of industrial units was produced by Irish owned units.

The West region had 20.1% of total gross industrial output from Irish owned units, while the Mid-East region had a rate of 25.2%.  See Headline table and Figure 1.

According to the Quarterly National Household Survey (QNHS) results in 2016, for the state, the total number of persons employed in Ireland in 2016 was estimated at 2,040,500 persons. Of this, 13.1% or 267,700 persons were employed in industrial activity.

Wages and salaries per person engaged in the Industry sector in Ireland in 2016 was highest in the Dublin region at €52,200, while in the Mid-East region the figure was €46,600.

The Border region reported the lowest average wage per person in Industry in 2016 at €38,000. The Midland region had the next lowest at €39,400 with the West region having an average wage of €41,000 for Industry.

The Midland region had the highest percentage of industrial gross output for small and medium sized units in Ireland in 2016 at 71.1%.

51% of total industrial employment or 25,400 Persons were engaged by small and medium industrial units in the Dublin region in 2016

The Midland region had the greatest proportion of persons engaged in small and medium sized industrial units at 8,500 or 70.6% of all such persons, while the remaining 29.4% or 3,500 persons were employed by large sized units.

The Midland region had the lowest number of person engaged in large industrial units at 3,500. See Figure 6.

Number of persons engaged in manufacturing units who exported increased 17.2% between 2013 and 2016

The split between the proportion of persons engaged in manufacturing units who exported and didn’t export between the years 2013 and 2016 has remained constant at just over 3:1 in favour of those who export. In 2016, 24.3% of all persons engaged were in manufacturing units who didn’t export. This figure is only a slight decrease on the 2013 percentage of 24.4%.

(i)   the Census of Industrial Enterprises covers those enterprises which are wholly or primarily engaged in industrial production published 20 September, 2018.

The Census of Industrial Production is required under Council Regulation (EC, Euratom) No 58/97. The 2016 census was taken in accordance with SI 44/2013.

Appreciation is extended to firms that co-operate in this annual census. The information they provide is treated as strictly confidential to the Central Statistics Office. Direct or indirect disclosure of information relating to individual respondents is avoided in the publication of results by combining categories containing small numbers of units and suppressing figures, etc. This factor also limits the degree of cross-classification that is possible in presenting results.

Although the census relates in principle to the calendar year, respondents are permitted to return figures for their nearest accounting year.  The end of the accounting year for all returns used falls between May of the reference year and April of the following year.  Returns which cover a period of less than 12 months are accepted in cases where businesses have started or ceased trading during the year.

All employment details in the 2016 census relate to the week ending 8 September 2016.  Concerns that had no persons engaged in this week (e.g. ceased operations earlier in the year or started production later in the year) were classified as having zero employment.  In tables which analyse local units in terms of persons engaged, these are included in the lowest size class, e.g. less than ten persons engaged.

The census is conducted by post.  A permanent up-to-date register is kept of all relevant local units and enterprises known to be involved in industrial production.  The register is maintained from the Central Business Register, administrative and public utility records, announcements in the press, business journals, field personnel contacts, etc. This register is constantly being updated.  This results in differing estimates for the total number of enterprises/local units through the dissemination cycle.

All returns are scrutinised clerically for internal accuracy.  They are compared with returns for previous years and in some instances with returns to other industrial inquiries.  Local unit and enterprise returns relating to the same enterprise are examined together for consistency.  A further set of consistency checks is carried out in the computer processing of the data.  Substantial queries arising from these scrutiny operations are referred to the respondent by telephone, in writing or via a field officer.

The 2016 results are classified by NACE Revision 2, which was first introduced for the year 2008.  A correlation table showing the relationship between headings of the old and new classifications is available on request.  Each 4 digit class in NACE Revision 2 relates to a specific form of economic activity, e.g. manufacture of basic pharmaceuticals products (NACE 2110).  The statistical units in the census (local unit and enterprise) are coded to the NACE class relating to their principal industrial activity during the census year.  In the case of local units, this is determined on the basis of detailed information provided on their production of individual products.  The activity classification of enterprises is based on the NACE codes of the constituent local units.  An enterprise that operates several industrial local units coded to different NACE classes is classified to the activity which accounts for the highest proportion of the total value added of the enterprise.

The scope of the census extends to NACE sections B, C, D and E, namely:

Section B:   Mining and quarrying

The enterprise census covers all enterprises which have three or more persons engaged and which are wholly or principally involved in industrial production (i.e. NACE Sections B to E).

If information for key non-respondents is available from an alternative source, for example, Monthly Production, Quarterly Statistics or Prodcom or a return for the previous year, then the record is manually estimated; otherwise a computerised imputation procedure is used. Full data for enterprises filling in the more restricted C forms is derived using a method known as ratio extension.  Ratio extension involves the application of ratios between known variables to cases where only one subcomponent is known.  The ratios are typically calculated at NACE class level before being applied, although some merging of NACE classes may take place in order to ensure that the ratio estimates are not based on very small populations.

In 2016 there were 17,555 enterprises known to the CSO to be involved wholly or primarily in industrial production (NACE Sections B, C, D and E).  Their total turnover was €227,154 million and purchases of goods and services amounted to €141,916 million;  total gross value added was €93,264 million.  The total number of persons engaged in these enterprises (excluding outside piece-workers) in September 2016 was 235,352; labour costs in the year amounted to €12,338 million, of which wages and salaries accounted for €10,808 million.

The enterprise census, on the other hand, relates to the trading dimension, namely turnover, purchases of materials and services and labour costs during the year.  One of the main variables in this census is, therefore, turnover, which represents the revenue received during the year.  This can be compared with gross output by means of the derived variable production value. This variable approximates closely to the value of gross output of the industrial local units operated by the enterprises.  The different treatment of excise duties and operating subsidies in the two censuses makes comparison more difficult for the small number of industries affected by these factors.

Scan the QR code below to view this release online or go to
http://www.cso.ie/en/releasesandpublications/er/ciprcd/censusofindustrialproduction-localunitsregionalandcountydata2016/