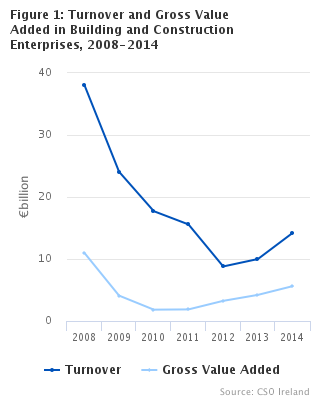 This release provides data on the Construction sector in Ireland for the period 2008 - 2014. Revised figures for 2008 - 2011 are included, along with newly published figures for 2012 - 2014. The detailed tables present a breakdown of the numbers of active Construction enterprises, number of persons engaged in such enterprises as well as a range of financial information classified by economic activity and employment size.

The Construction series 2008 - 2011 has been revised due to a number of factors:

(iii) Other adjustments. During the review, the opportunity was taken to update the series for some sectoral NACE adjustments (enterprises being reclassified from one particular NACE sector to another).

As well documented, the Construction sector in Ireland has experienced significant adjustment since 2008. This has also contributed to data collection and estimation challenges for this sector, particularly around stock valuations and the timing of recording the associated losses. Care should therefore be taken in interpreting year on year changes. The overall trend for 2008 - 2014 provides a clearer insight into the Construction sector.

The new estimates for Construction employment levels are higher than the original series ranging from 5% to 44%. See Figure 3.

Updating the Construction series for the methodological improvements referenced above, results in lower estimates for GVA (except for 2008) – a decrease in the range of 31-52% depending on the year. The reason for a decrease when additional enterprises are added is due to the improved estimates of enterprise financial loss. Using Administrative tax data has enabled the survey to now include these losses. The period 2008 - 2011 in particular would have seen significant construction losses. See Figure 4.

Please note: Additional analysis for Building and Constructions sectors in Ireland, including International comparisons, will be available in the Business In Ireland 2014 publication.

Administrative data (tax) is used to estimate the financial variables of non-respondent and non-sampled enterprises..

The Census of Building and Construction first appeared as a separate census in 1966.  Prior to that, data on the building and construction sector was collected and published in the Irish Statistical Bulletin/ Irish Trade Journal as part of the Census of Industrial Production (first inclusion in the 1926 Census).  It was first published as a separate release document in 1981.  Data since 1981 is available electronically on our website www.cso.ie via CSO Statistical Databases/Statbank.

Nace 42.1 Construction of roads and railways

Employees are persons who are paid a fixed wage or salary.  Persons at work or temporarily absent because of illness, holidays, strike etc. are included. Persons working on a labour-only subcontract basis are excluded.

Production value represents the net selling value of work done during the year, whether sold or not.  It is valued exclusive of VAT.  It incorporates an element of double counting arising from the fact that work done on a subcontract basis by firms in a particular sector for other firms in the same sector is included in the turnover figures provided by both firms.  However, in the calculation of Gross Value Added and variable 43 (value of work done by own staff) this double counting is eliminated.

Intermediate consumption represents the value of building materials, fuel, industrial services and other goods and services used in production.  The definition of this variable has been changed from that given in the 1981 results (Statistical Bulletin, March 1985) to include payments to subcontractors as part of the cost of industrial services, thereby eliminating double counting from the Gross Value Added figures.

Scan the QR code below to view this release online or go to
http://www.cso.ie/en/releasesandpublications/er/bci/buildingandconstructioninquiry2014/