Area, Yield and Production of Crops 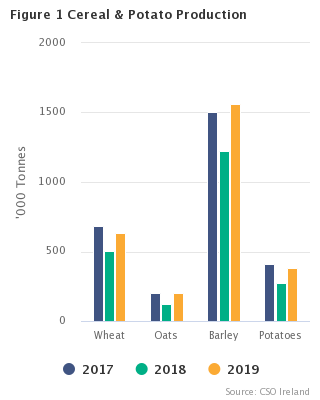 Further comparisons with the 2018 results show that:

This release presents final estimates of the area, yield and production of the main arable crops in 2019 together with the comparable estimates for 2017 and 2018. The June 2017 – June 2019 estimates for the area under crops shown in Table 1 have been obtained from the Department of Agriculture, Food and the Marine (DAFM) Basic Payment Scheme.

The yield estimates are obtained from a joint survey conducted by Teagasc and the CSO.

As a result of rounding there may be slight discrepancies between the sum (or difference) of the constituent items and the total shown. Percentage changes have been calculated on actual figures.

Scan the QR code below to view this release online or go to
http://www.cso.ie/en/releasesandpublications/er/aypc/areayieldandproductionofcrops2019/