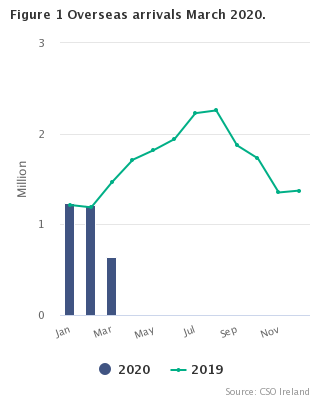 On balance, there was a net inflow of 32,900 persons to Ireland. The staging country making the greatest contribution to the net inflow was Spain. Some 17,000 more persons arrived from Spain than departed for Spain. The staging country showing the greatest net outflow was Germany. Departures for Germany exceeded arrivals by 4,100 persons (See Table 1A).

Compared to the same month of the previous year, the staging country showing the most notable decrease in traffic was Italy. Arrivals from Italy decreased by 88.6% whereas departures for Italy deceased by 87.8% (See Table 1A).

Show Table 1A Overseas arrivals and departures by mode and route, March 2019 and 2020

Show Table 1B Overseas arrivals and departures by mode and route, February 2019 and 2020

Show Table 1C Overseas arrivals and departures by mode and route, January 2019 and 2020

Show Table 2 Overseas arrivals and departures by mode and route, January-March 2019 and 2020

In a small number of cases, due to restrictions imposed by the current Covid-19 crisis, data providers have not been able to transmit data to the CSO in time for this release. In these cases, data have been imputed for these providers. Imputation is made by applying the general trends observed by the other providers on comparable routes and applying these trends to the previous month’s data. In March 2020 imputed passengers accounted for just 1.8% of all arrivals and 1.9% of all departures.

Scan the QR code below to view this release online or go to
http://www.cso.ie/en/releasesandpublications/er/ast/airandseatravelstatisticsmarch2020/