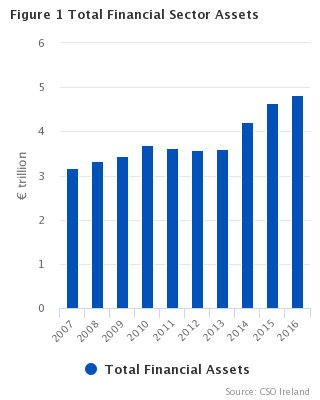 Significant changes have taken place in the balance sheets of financial corporations in the wake of the global financial crisis over the 2008-2016 period. Some of these changes are apparent in the accounts but some are less evident due to offsetting shifts within the sector.

The Central Bank (S.121) sector has seen a dramatic decrease in Currency and Deposits (AF.2) since 2010 and a large increase in Debt Securities (AF.3) in 2013, but with an overall downward trend in assets. In 2016, 84% of total financial assets came from Debt Securities (Figure 3) while 83% of total liabilities are Currency and Deposits (AF.2) with the remainder coming from equity (AF.5). The assets of the Central Bank increased from €54bn in 2007 to €202bn in 2010 mainly as a result of the increased emergency liquidity assistance (ELA) provided to the Irish banking system.
In 2013 the conversion of assets from Currency and Deposits (AF.2) to Debt Securities (AF.3) are a result of securities acquired by the Central Bank following the liquidation of the Irish Bank Resolution Corporation (IBRC). The portfolio of securities is comprised of eight non-amortising Irish Government Floating Rate Notes (FRNs) (€29bn), non-amortising NAMA Bonds (€13bn) and the 5.4% Irish 2025 Government bond acquired by the Bank following the termination of the IBRC’s market repo in February 2013 (€4bn). For further details see Note 16 in the Central Bank Annual Report 2013 (page 122).

The Monetary Financial Institutions sector is made up of deposit-taking corporations excluding the central bank (S.121), such as retail banks, building societies and credit unions (S.122) and Money Market Funds (S.123). The balance sheet of the Monetary Financial Institutions sector contracted during the period 2009-2013, where its assets fell by €742bn and its liabilities by €753bn, as shown in Figures 4 and 5. During 2015 this trend was reversed as financial assets grew by 8.2% and liabilities by 0.7% over their 2013 values. This growth was driven by increased Debt Securities (AF.3) on the assets side and increased investment through Equity (AF.5) on the liabilities side. The year 2016 saw a 1.7% decrease in assets and a 2.2% increase in liabilities over the 2015 values.

The Investment Funds sector (S.124) consists of all collective investment schemes except those classified in the Money Market subsector. The balance sheet of the Investment Funds sector continued to grow during 2016 (Figure 6). Figure 2 shows the change in contribution by S.124 to the overall size of the financial sector balance sheet. During 2016 this contribution increased in absolute terms while continuing to comprise of approximately 40% of the total assets. Apart from a drop in balance sheet size during 2008, relating to the financial crisis, the sector has exhibited continuous growth in the intervening period, where its financial assets have grown cumulatively by €1,569bn.
During the period 2008-2016, the investment funds sector, excluding Money Market Funds, has increased more than five-fold in size in Ireland. The increase in assets is mainly driven by Debt Securities (AF.3) and Equity and Investment Funds (AF.5), while the liabilities are mainly composed of equity. Part of this increase is due to the reclassification of Money Market Funds (S.123) to Investment Funds (S.124) as discussed above.

The Other Financial Corporations sector saw an increasing trend in balance sheet growth over the period 2006-2011 (Figures 7 and 8). In 2012 and 2013 the sector underwent a contraction in its balance sheet mainly due to a reduction in Debt Securities (AF.3). This trend was reversed in 2014 with an increase in AF.3 assets. While the liabilities are largely made up of Debt Securities (AF.3) and Loans (AF.4), the assets are dominated by Loans (AF.4), in the most part held by treasury companies and special purpose vehicles. While the increase seen in 2015 was mainly driven by special purpose vehicles, the increase in 2016 was largely related to treasury companies. These are often set up in Ireland to fund the financial activities of related multinationals in Ireland and Europe.

The Insurance Corporations (S.128) and Pension Funds (S.129) sector has seen an overall upward movement in balance sheet growth over the period 2007-2016 (Figure 9). The increase in 2016 on the assets side was driven by Equity and Investment Fund Shares (AF.5). Most of the liabilities are to households which are categorised as Insurance, Pension and Standardised Guarantee Schemes (AF.6). AF.6 includes non-life insurance technical reserves, life insurance and annuity entitlements, and pension entitlements.

The AF.6 classification on the asset side of the balance sheet also covers reinsurance data for Ireland. Here an insurer may protect against an unexpectedly large number of claims, or exceptionally heavy claims, by taking out a reinsurance policy with a reinsurer. Reinsurance corporations are concentrated in a limited number of financial centres, and so many of the reinsurance flows are transactions with the rest of the world.

We may also look at the absolute size of the Irish Financial Sector relative to other EU countries, this is shown in Figure 11. Here Ireland is mid table, with a financial sector that is smaller than countries such as the United Kingdom, Germany and France but substantially bigger than Sweden, Belgium or Finland.

This publication is consistent with the Institutional Sector Accounts publication published by the CSO in November 2017. Here we highlight the importance of the Financial Corporations sector which is presented on a subsector by subsector basis and the commentary emphasises the time series behaviour across subsectors. The Financial Transaction account data can be found on the StatBank.

S.12 Financial Corporations are corporate bodies producing financial services on a commercial basis. They can take various legal forms, with a range of ownership arrangements. Further details of the subsectors of S.12 and the financial instrument classes are provided in Assets and Liabilities of the Financial Sector Methodology (PDF 142KB)

Note, however, that estimates are not available of the stock of non-financial assets (property, equipment, valuables and intangible non-financial assets) and it is not therefore possible to estimate the net worth of each sector or of the total economy.

Scan the QR code below to view this release online or go to
http://www.cso.ie/en/releasesandpublications/er/alfs/assetsandliabilitiesofthefinancialsector2016/