Administrative burden of CSO surveys on businesses increases by 8.3% in 2020. 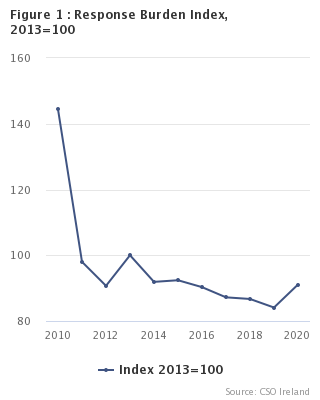 The response burden is a measure of the total administrative burden placed on Irish enterprises and agricultural holdings by Central Statistics Office (CSO) surveys when calculated on an actual compliance basis1.

Changes to the response burden include natural fluctuation with enterprises entering and leaving the survey population over the course of the year, and variation in response expected. As some surveys such as the Farm Structure Survey (every 2 to 3 years) and the Census of Agriculture (every ten years i.e. surveyed in 2020), don't take place every year, care needs to be taken when comparing the response burden from one year to that of the previous year.  Improved data and development of methodologies also contribute to variation within the response burden.

The COVID-19 pandemic is another reason why 2020 figures are not directly comparable with 2019. Excluding the excess returns of the 2020 June Agriculture Survey above the 2019 figure, the overall number of forms returned are estimated at 176,200 which is 20,000 less than the returns for 2019. This 10.2% reduction compares with reductions of 1% and 5.4% for the previous two years. Feedback from CSO survey managers indicate that the majority of the 10.2% reduction in 2020 is considered as COVID-19 pandemic related, with the number of forms returned by businesses reduced in approximately two thirds of surveys. This reduction was temporary. A sustained reduction at this level would have a serious impact on statistical quality.

The increase in the response burden level in 2020 reflects the expansion of the 2020 June Agricultural Survey into the decennial Census of Agriculture.  This expansion, with 128,400 more forms issued compared with the 2019 June Agriculture Survey more than offset an annual overall reduction (12,800) in forms issued to businesses from all the other surveys combined in 2020. See Tables 1,2 and Figure 1.

A comparison with 2010, when the previous Census of Agriculture was issued, shows the Administrative Burden - actual compliance was much greater in 2010 with a response burden index of 144.4 compared with 91.1 for 2020.  See Tables 1, 2 and Figure 1.

The total number of hours spent by businesses on responding to surveys in 2020 was 225,500 or 27.3 minutes per business, measured on the basis of forms at least partially completed and actually returned to the CSO (i.e., if burden is based on actual compliance). The administrative cost1 of actual compliance was €6.9 million, or €14.01 per enterprise, measured on 2013 prices. The administrative burden (i.e. administrative costs less business-as-usual costs), was €4.18 million, or €8.45 per enterprise. See Table 2 & Methodology.

The most burdensome survey, in terms of the number of survey forms issued and completed, in 2020 was the June Agricultural Survey, which expanded into the decennial Census of Agriculture with 138,900 forms issued, of which 105,900 were returned partially or wholly completed. The actual compliance administration costs of completing these Census of Agriculture forms in 2020 were €1.2 million where a full compliance administrative costs would be €1.6 million.

Notwithstanding the ever-growing international demand for statistics (from organisations such as the European Commission, the European Central Bank, the United Nations, the Organisation for Economic Co-operation and Development, etc.), minimising the administrative burden placed on CSO business respondents is, and has been for many years, a corporate priority of the CSO. (See the Statement Of Strategy 2020-2023.pdf ) The CSO has taken, and continues to take, a number of actions towards this end. Amongst these actions are:

In the case of Ireland, it should be noted that most, but not all, government statistical inquiries are conducted by the CSO, and that almost all CSO surveys are driven by EU legislation with limited scope for national interpretation during implementation. The above actions have been possible within the structures of the governing EU legislation.

Scan the QR code below to view this release online or go to
http://www.cso.ie/en/releasesandpublications/ep/p-rbb/responseburdenbarometer2020/