Output and Value Added by Activity 2019

‌Output at basic prices covers the value of all goods produced for sale, including unsold goods, and all receipts for services rendered. Output furthermore covers the market equivalent of goods and services produced for own use, such as own account capital formation, services of owner-occupied dwellings and agricultural products produced by farmers for own consumption. For more information see the Background Notes.

The following set of four treemap charts illustrate the proportional composition of the total by each A21 sector in a particular year (1995, 2005, 2010, 2019). Clicking on a treemap enlarges the image and offers options to look at the four treemaps as a slideshow, allowing for comparisons over time. The value and rank of each A21 sector are also provided in the tables below. This structure is repeated across each thematic Chapter. Further details on the composition of the A21 and A10 sectors are provided in the charts and tables and in the Background Notes. 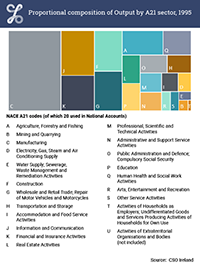 Proportional composition of Output by A21 sector, 1995 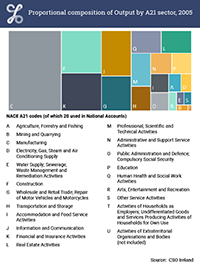 Proportional composition of Output by A21 sector, 2005 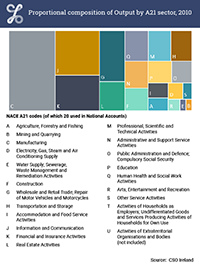 Proportional composition of Output by A21 sector, 2010 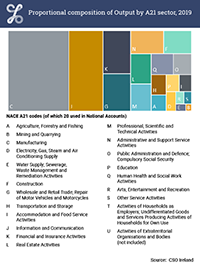 Proportional composition of Output by A21 sector, 2019

In the above figure, a version of which is repeated across Chapters, the 1995-2019 time-series of some notable sectors of the economy are displayed.

Manufacturing (C) was the biggest single A21 sector of the economy over the entire 1995-2019 period. Information and Communication (J) was the second biggest sector in 2019. These two sectors dominated and combined they comprised 51.8% of total Output across the economy in 2019, which was an increase from 39.1% in 1995.

The Other category in the figure above is total Output less Manufacturing,  Information and Communication and Construction. Sector figures can be found in the tables above and in the full 1995-2019 time series available in the CSO's StatBank database.

Go to next chapter Intermediate Consumption