Between 2011 and 2016 the extent of homelessness and the variety of approaches being used to accommodate homeless persons has increased.  This served to heighten the complexity of conducting the homeless count.  Significantly, there was increased reliance on the use of commercial hotels for accommodating adults with child dependents in lieu of access to established temporary emergency accommodation for homeless persons.

At that meeting it was agreed that persons would be classified as being homeless on the basis of where they spent Census Night, as opposed to some element of self-identification, such as responding to a specific question on the census form. This is the same approach used to enumerate homeless persons in Census 2011.

It was also agreed that DHPLG, local authorities and agencies working with the homeless would provide CSO with lists of accommodation which were designated as providing shelter for homeless persons. To facilitate this approach, the Pathway Accommodation and Support System (PASS) was utilized to help identify these establishments. PASS is the national client management data system hosted by the DRHE (National PASS Office) on behalf of the Department and all housing authorities.  All Ireland’s local authorities use PASS on a daily basis as the data system that supports interactions with persons using homeless services in their locality.  Each local authority is organized into one of nine regions and each region has a lead local authority responsible for the maintenance of good quality data in the PASS system and the production of anonymized reports to the DHPLG under a national reporting template.

The DRHE assisted CSO with the enumeration of persons sleeping rough in the Dublin area on Census Night.

Identification of accommodation for the homeless

Properties identified as providing accommodation for the homeless and included in this publication, fall into one of three categories:

The accommodation was not on any predesignated list but was identified by the manager of the communal establishment during the field operation by ticking box 7 ‘Shelter or refuge (including accommodation for homeless persons)’ for question E1 What is the type of the establishment? on the Census Listing Form. 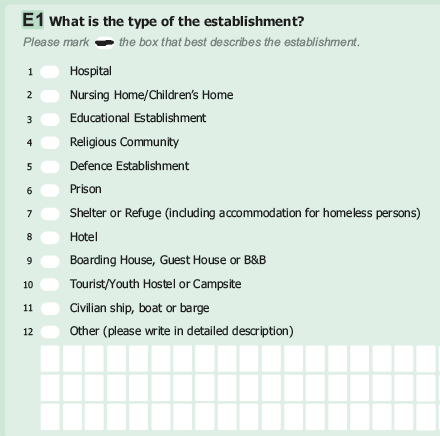 In advance of the census field operation, all enumerators and their field managers were informed of the list of properties that fell within their specific area and were given special instructions regarding the enumeration of these establishments. These instructions emphasised the importance of correctly identifying each establishment and their prioritisation during the collection phase, and the special treatment of families in these units.

Relationships between family members are not normally captured for persons in communal establishments as part of the Irish census. In order to record family details for related persons in homeless accommodation, Household Forms were issued to family units staying in designated establishments. A family is defined for census purposes as one or both parents with their children, married couples or partners living together.

There has been increased use of Private Emergency Accommodation (PEAs, namely hotels and guesthouses) in recent years to accommodate homeless persons and in particular families in Dublin.

The CSO was highly conscious of the sensitivity around this issue and the importance of protecting the confidentiality of the information of all those involved in this situation. In conjunction with the DRHE, three dedicated enumerators were employed to deal exclusively with enumerating homeless families residing in such PEAs in the Dublin area.

The Census Homeless Methodology Liaison Group agreed, in advance of the Census field operation, that persons in Long Term Accommodation (LTA) would not be included in the main results in this report. The rationale behind this decision was that although these long-term residents may require a certain level of support, they are for the most part considered tenants (although some have license arrangements) and therefore should not be included in the homeless population count. This differed from 2011 when this group was included in the main result.

A count of rough sleepers also took place on the night of the Census. The following local authorities, in conjunction with the CSO, conducted rough sleeper counts:

For areas not covered by the above authorities, the Census field staff enumerated the rough sleepers with the assistance of local Gardaí and/or local homeless agencies.

CSO wishes to express its thanks to the DRHE and all local authorities for assisting the CSO in this work.

Presentation and analysis of the results

Regional Homelessness Action Plans were adopted in 2010 by the 34 City and County Councils under the Housing (Miscellaneous Provisions) Act 2009.

The regions agree with Regional Authority areas with the exception of the Border region which is split into two – the North East and North West.

The lead Local Authority in each region is in bold.

A European descriptive typology (ETHOS) has been developed as a research tool to provide a way of structuring research on homelessness so that valid comparisons can be made across European countries. Within this typology are four conceptual categories of homeless persons, namely roofless, homeless, insecure and inadequate. See table at the end of the ‘Background notes’.

For the purposes of this report, homeless persons have been identified by where they spent Census Night i.e. the definition is based on the accommodation type rather than on the individual person.

Only operational categories 1, 2, 3, and 4 detailed below within the ‘Roofless’ and ‘Houseless’ conceptual categories have been enumerated as part of the Census 2016 homeless count.