Over a third of students have visited the GPO 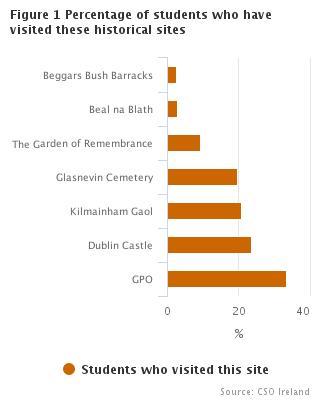 CensusAtSchool is a non-profit making international project funded by organisations interested in promoting good use of statistics, mathematics and data handling. Ireland became involved in CensusAtSchool in 2009 when the Professional Development Service for Teachers (PDST), the CSO, Project Maths and the National Council for Curriculum and Assessment (NCCA) collaborated to set-up the Irish website www.censusatschool.ie.

4,199 (1.1%) from an estimated 380,000 secondary school students completed the Phase 15 questionnaire of the CensusAtSchool survey between September 2015 and August 2016. The questionnaire covered a variety of topics ranging from 1916 related topics, the level of Irish speaking to the type of school transport used.

4,199 secondary school attendees from 169 secondary schools completed the Phase 15 questionnaire of the CensusAtSchool survey between September 2015 and August 2016. Because the survey is voluntary and not part of a representative sampling process, the results of the survey are less reliable in providing inferences about the overall secondary school student population.

A data tool for examining CensusAtSchool data can be found: