Night Owl students catch up on sleep in the morning 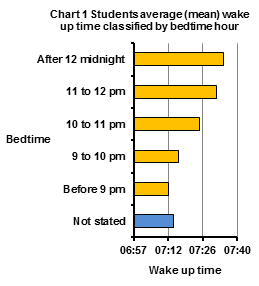 CensusAtSchool is a non-profit making international project funded by organisations interested in promoting good use of statistics, mathematics and data handling. Ireland became involved in CensusAtSchool in 2009 when the Professional Development Service for Teachers (PDST), the CSO, Project Maths and the National Council for Curriculum and Assessment (NCCA) collaborated to set-up the Irish website www.censusatschool.ie 5,348 (1.5%) from an estimated 368,000 secondary school students completed the Phase 14 questionnaire of the CensusAtSchool survey between September 2014 and August 2015. The questionnaire covered a variety of topics ranging from how often students participated in family activities each week to the number of text messages they send daily.

The Royal Statistical Centre for Statistical Education (RSSCSE) started the CensusAtSchool project in 2000 in conjunction with the Office of National Statistics (ONS) in the UK. The project, originally a one-off, was linked to the UK population census of 2001. It has now developed into a dynamic, on-going and exciting initiative running in a number of countries.

5,348 secondary school attendees from 155 secondary schools completed the Phase14 questionnaire of the CensusAtSchool survey between September 2014 and August 2015. Because the survey is voluntary and not part of a representative sampling process, the results of the survey are less reliable in providing inferences about the overall secondary school student population. 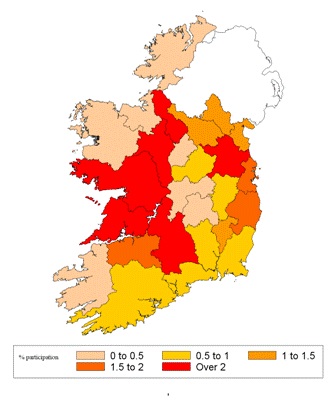 Note: The map only includes survey response when the Roll number on the questionnaire response matched a school Roll number provided by the Department of Education and Skills.