OMG....! 30% of students sleep with their phone under their pillow.

7,150 secondary school attendees from 216 schools completed the Phase11 questionnaire of the CensusAtSchool survey between August 2011 and August 2012. The questionnaire covered a variety of topics ranging from what students have for breakfast, the types of sports activity they participate in, where they keep their mobile phones and how much they knew about the Olympics.

Details on the CensusAtSchool project and more results from Phase 11 can be found on the website http://www.censusatschool.ie.

Which one of the following would you rather have?
Overall 37% of all respondents to the survey indicated “skill” to be their preferred attribute. The chart highlights "strength" is more preferred by male students than female students.

Where did you keep your mobile phone last night while you slept?
A greater percentage of female respondents (35%) sleep with their phones under their pillows than males (23%) .

What time did you get out of bed this morning?
The majority of respondents indicated they get out of bed each morning between 7.30 am and 7.59 am (33.2 %).

On a school day, do you eat breakfast?

In Figure 5b, we look more closely at the profile of students who stated they do not eat breakfast. The chart shows a higher percentage of female students miss breakfast than males.

Please state what you had for breakfast this morning?
Cereal was respondents most popular breakfast with 53%. Porridge which was not listed specifically on the survey was mentioned as the most popular other type of breakfast. In addition to breakfast, the survey indicated that on average male students consume 3.9 portions of fruit a day. Female students consume an average of 3.6 portions a day.

What sporting activities have you taken part in during the last year?
Respondents listed 24 sports. The top 10 choices are shown in Figure 7.

Name a famous Olympian and state the event he/she competed in.
Usain Bolt was the most popular Olympian to be named in the survey followed by Sonia O’Sullivan and Michael Phelps. 85% of respondents correctly listed Athletics as his Olympic discipline. 15% of respondents listed a total of 21 other sports they felt Bolt had competed in ranging from Archery to Taekwondo.

Figure 9 shows how the level of responses to the CensusAtSchool declined over the length of the questionnaire. Of the students that entered the survey, 91% completed question 1A. In contrast 67% of the individuals continued through the survey to complete question 21. The highlighted areas on the chart show events that appear to have affected the response rates e.g. respondents moving to a new page of the questionnaire corresponded with a more significant drop in the individual response rates. 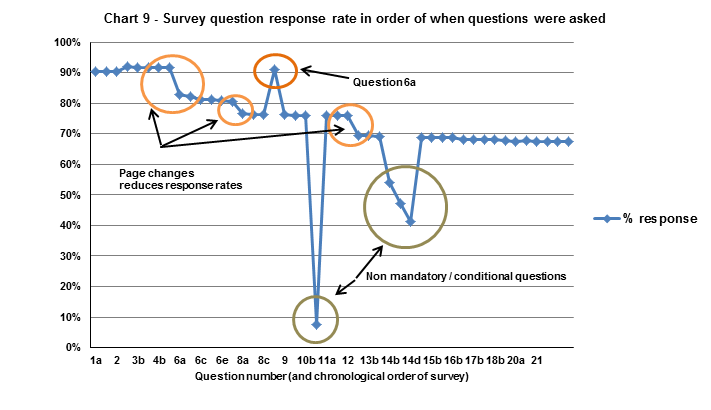