Jack and Emily again most popular babies' names in 2015 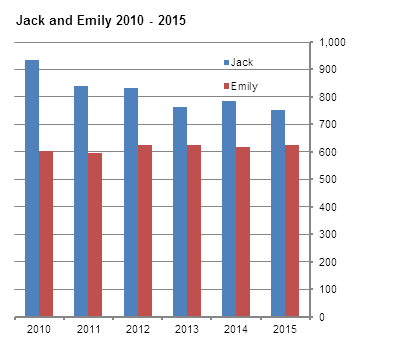 Jack and Emily remain the most popular babies’ names registered in 2015.  Jack retains the top position it has held every year since 2007 and Emily has retained the number one spot that it first claimed in 2011.  See tables 1 and 2.

As in previous years, the tables show that girls are given a wider variety of names than boys with 4,487 girls’ names registered compared to 3,475 boys’ names.  Despite the greater number of male births, a smaller range of names were used for boys than for girls.

For boys, eight areas favoured names outside of the top five for boys in 2015.  In Galway City, Adam was the most popular boy's name while Charlie was the most popular boy’s name registered in Kilkenny and in Wexford.  In Laois and Longford, Michael and Patrick respectively got the number one spot.  In Waterford City, Daniel, Harry, Luke, Oisin and Oliver all shared the top position.  Similarly, in South Tipperary Darragh and Harry along with Jack were the most favoured names.  In Roscommon, Thomas along with Jack proved most popular.  See table 8(a).

Where both parents were stated as being Irish nationals, Jack was the top ranked name for boys.  Jack was also the most popular choice with parents of UK nationality while Noah was the most popular boy’s name chosen by parents from the EU15 (excl. Irl & UK).  David was the name chosen most often by parents from the EU28 excl. EU15.  Parents from nations outside the EU made Muhammad the highest ranked name of baby boys registered in Ireland in 2015.  See table 9.

For girls where both parents were Irish nationals, Emily was the most popular name.  Isla and Chloe were the names most often chosen by parents of UK nationality.  Chloe along with Emma ranked first with parents of the EU15 (excl. Irl & UK) and Julia took the top spot with parents of the EU 28 excl. EU15 countries.  Parents from outside the EU28, made Fatima the name that ranked highest of baby girls registered in Ireland in 2015.  See table 9.

John and Mary the most popular names in 1965

An analysis was done of the baby names registered fifty years earlier in 1965. There were 3,360 boys whose registered name was John in 1965 which made it the most popular name for boys.  The name John was ranked number 28 in popularity in 2015 when 266 baby boys were so named.  See tables 11 and 12.

The top five boys’ names in 1965 were, in order, John, Patrick, Michael, James and Thomas.  Of these five names only James was in the top five names registered for boys fifty years later in 2015.   See table 11.

For girls, Mary was the name of choice for 3,229 parents for their newborn daughters in 1965 making it the most popular name for girls born that year.  It was also still among the top 100 names (ranked 74) for baby girls born in Ireland in 2015 when 91 newborn girls were named Mary.  See tables 11 and 12.

Show Table 8a Most popular boys' names, classified by area of residence of mother, between 2013 and 2015

Show Table 8b Most popular girls' names, classified by area of residence of mother, between 2013 and 2015

Show Table 9 Most popular babies' names registered in 2015, classified by nationality of parents

These results are based on an analysis of the first names recorded on birth returns for registration and vital statistics, begun by the CSO in 1998. All birth notifications in 2015 included the baby’s first name when the statistical return was sent to the CSO. 1963, 1964 and 1965 are  the first years prior to 1998 for which an analysis of names are available. Data for boys' names is available for the intervening years (1966 to 1997 inclusive) on our statbank. It is hoped to have the corresponding data for the girls' names on the statbank in the near future.

Different spellings of a name have been treated as separate names. For example, while there were 299 boys named Cillian, another 73 had the alternate spelling Killian. Similarly, if you combine the number of girls named Hannah (338) and Hanna (76) then it becomes the 4th most popular name for girls in 2015. Variants of names and abbreviations have also been treated as separate names. For example, Jack, Sean and John account between them for 1,548 boys. These were counted as separate names and rank first, fifth and twenty-eighth respectively. If treated as variants of John, it would rank as the most popular boys’ name. Names containing accents have been recorded without those accents e.g. Seán was recorded as Sean.

Scan the QR code below to view this release online or go to
http://www.cso.ie/en/releasesandpublications/er/ibn/irishbabiesnames2015/