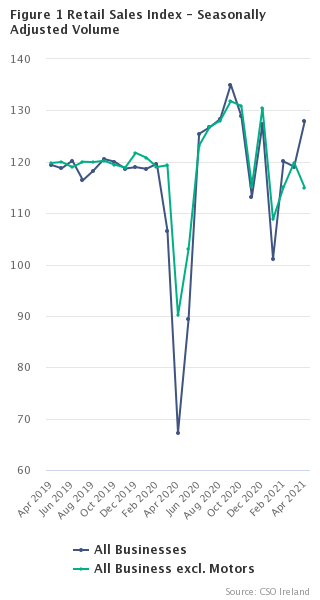 Recovering from the extremely low level of April 2020, the sectors with the highest annual increases were Furniture & Lighting (+694%), Motor Trades (+576%) and Hardware, Paints & Glass (+166%). While these annual increases are significant, caution should be exercised when interpreting these changes, as the comparison is with an historically low base from a year ago.

In April of last year, the annual volume of retail sales in Furniture & Lighting fell by 86.0%, Motor Trades dropped by 81.0% and Hardware, Paints & Glass declined by 49.6%. At the other end of the scale, the volume of sales in Non-Specialised Stores (including supermarkets), which remained an essential retail service throughout the duration of the pandemic, had an annual increase of just 3.2% in April.

When Motor Trades are excluded, the volume of retail sales decreased by 4.1% in April over the previous month and increased by 27.6% when compared to April 2020, again showing a strong recovery from the low base of last year. See Table 2.