Income and Expenditure on Water Supply and Waste Water Treatment 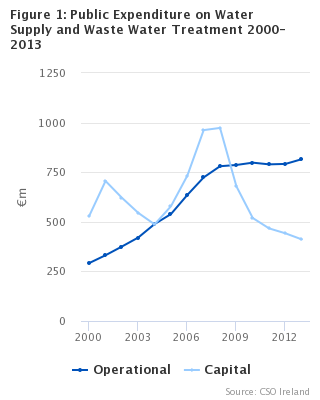 In comparison with expenditure, capital income varied from 78% of total income in 2000 to 50% in 2013 reflecting a decrease in income from State grants (see Tables 2A and 2C). Figure 2 compares total expenditure with total income over the period 2000-2013. Expenditure exceeded income in all years but particularly in 2007 and 2008 with the gap widening again in 2013.

Table 3A provides data on expenditure on water supply and waste water treatment by local authority. The greater Dublin area accounted for 29% of total expenditure in 2013: Dublin City accounted for 15%; Dun Laoghaire-Rathdown for 4%; Fingal for 7%; and South Dublin for 3%. Outside of the greater Dublin region, Cork County was next highest in 2013 at almost €100 million (8%) followed by Kildare at €66 million (5%). The lowest level of expenditure in 2013 was in Leitrim at almost €11 million (1%) followed by Galway City at €15 million and Carlow at €16 million. Tables 3B and 3C show the allocation of operational and capital expenditure by local authority for the period 2000-2013. For capital expenditure, most local authorities peaked during 2006-2009. However, Cork City (2001-2003), Dublin City (2001), Galway City (2001) and Limerick (2002) all peaked earlier.

Tables 7.1 to 7.31 provide data for 2000-2013 for each local authority. The tables show operational, capital, and total income and expenditure. Tables 8.1 to 8.88 show the same data but at a more detailed level of 88 local authorities. These tables show individual county, city, borough and town councils. This more detailed geographical information is more relevant for analysis of water quality in comparison with operational and capital expenditure.