Autodiesel clearances up 42% and unleaded petrol up 86% in May 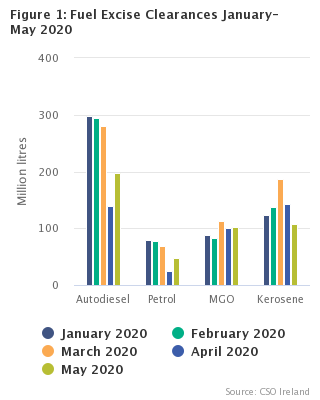 There was an increase in excise clearances of unleaded petrol of 86% in May 2020 compared with April 2020 (see Figure 1).

Clearances of kerosene (mainly used as a heating fuel) in May 2020 were 24% lower than in April 2020 reflecting the seasonal consumption of heating fuels (see headline table). The figure for kerosene of 108 million litres was the highest excise clearance figure for the month of May in the 2000-2020 series (see Table 1D). Excise clearances of marked gas oil were 1.4% higher in May 2020 compared with April 2020. Marked gas oil is used for off-road purposes such as agriculture and heating of larger buildings. Tables 3C and 3D show that there were large decreases for March to May 2020 in the Wholesale Price Index for gas oil and fuel oil which may have resulted in some advance purchases of heating oils.

Table 4 and Figure 5 show trends in the monthly mean temperature at Dublin Airport. The graph shows that there were two cold spells in January 2010, when the average temperature for the month was 1.7 degrees centigrade, and in December 2010 when the mean temperature was -0.1 degrees. Table 1D indicates the impact of these cold spells on clearances of kerosene with February 2010 showing the highest February figure in the 2000-2020 series. November and December 2010 were also the highest monthly figures for those months in the 2000-2019 series.