Show Menu
You are here: Home / Statistics / Climate and Energy / Business Energy Use

Electricity accounted for 34% of business energy costs in 2016 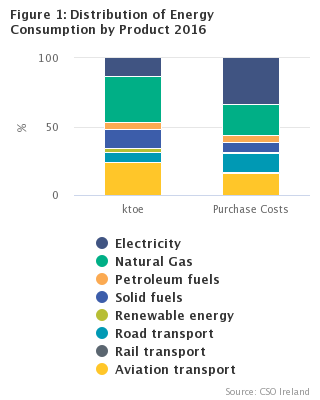 The mix of energy products used by Irish enterprises in 2016 is given in Figure 1. In terms of kilotonnes of oil equivalent (ktoe), natural gas accounted for 33% of the total ktoe with aviation fuels accounting for a further 24%. Solid fuels comprised another 14% and electricity an additional 13% (see Table 2A).

In monetary terms, the proportion of total fuel purchase costs accounted for by each energy product in 2016 was quite different than the ktoe distribution (see Tables 2A and 2C). This difference is partly accounted for by electricity being used for final energy consumption whereas a substantial proportion of natural gas is used for intermediate consumption to make electricity (see Table 4A).

The Industry sector accounted for 55% of total non-domestic energy consumption in 2016 in terms of ktoe. The energy products used by industry have a lower relative cost than those used by the Services sector. Hence the proportion of purchase costs accounted for by the Industry sector was 42% in 2016 compared with 58% of fuel purchase costs being paid for by the Services sector. The total consumption by industry and services increased by 8.2% in quantity terms (ktoe) in 2016 but fell by 4.6% in cost terms (see Tables 1A and 1B).